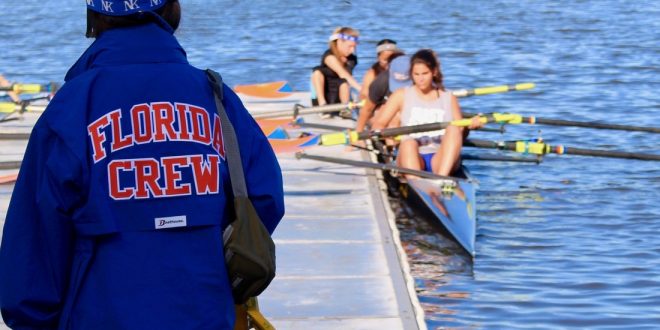 The University of Florida Crew Team heads out to practice to prepare for their upcoming competition.

Attending a university, which is considered sports royalty, provides a number of opportunities to find a sport that resonates with any individual. However, with football, basketball, baseball, softball and a number of other varsity sports that fill Twitter feeds and are continuously reported on by different sports media outlets, some can be overlooked.

Beyond the trees and shrubs of Newnans Lake in Gainesville, the University of Florida’s crew team hits the water and practices six days a week to prepare for their competition season.

Rowing, known to many as crew, is a sport in the United States that has a history dating back to the Egyptians.

Crew can be done either as a leisure sport or done competitively.

The objective of the competitive sport is to race a shell on the water using oars to finish a certain distance in the fastest amount of time. The size of the boats vary and range from an individual competitor up to eight in a shell.

Novice: A first-year rower; Once you are done with your first year of rowing you automatically move up to varsity.

Coxswain: a member that sits at the stern of the boat and faces the rowers. In charge of keeping pace and rhythm of the boat.

4+: four rowers in a boat plus a coxswain

8+: eight rowers in a boat plus a coxswain

According to facts listed on US Rowing, rowing is one of the original sports in the Olympic Games and it was the first intercollegiate sport that competed in the U.S. 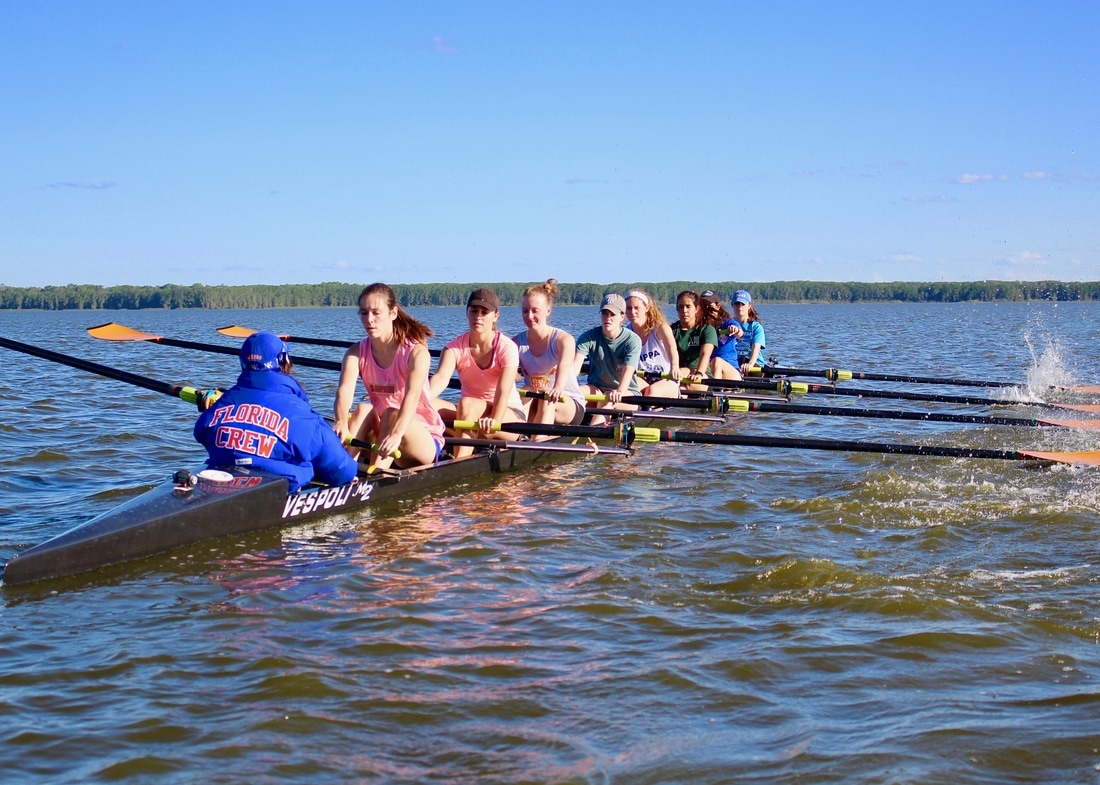 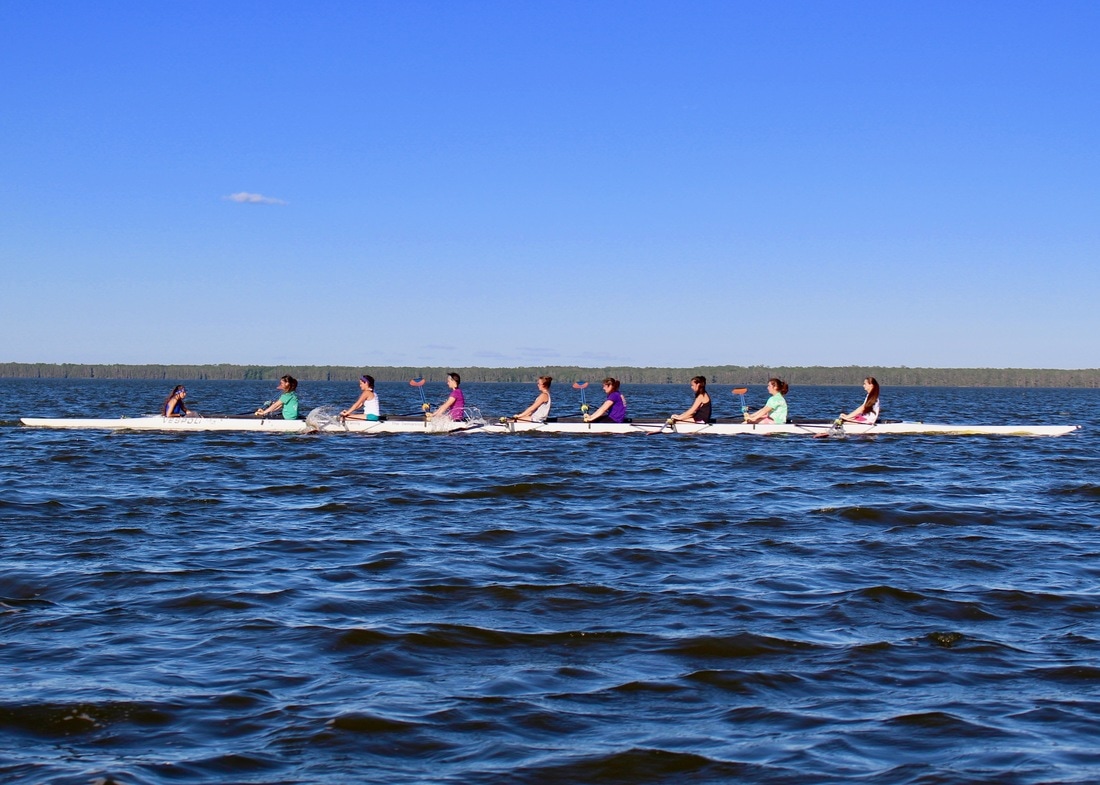 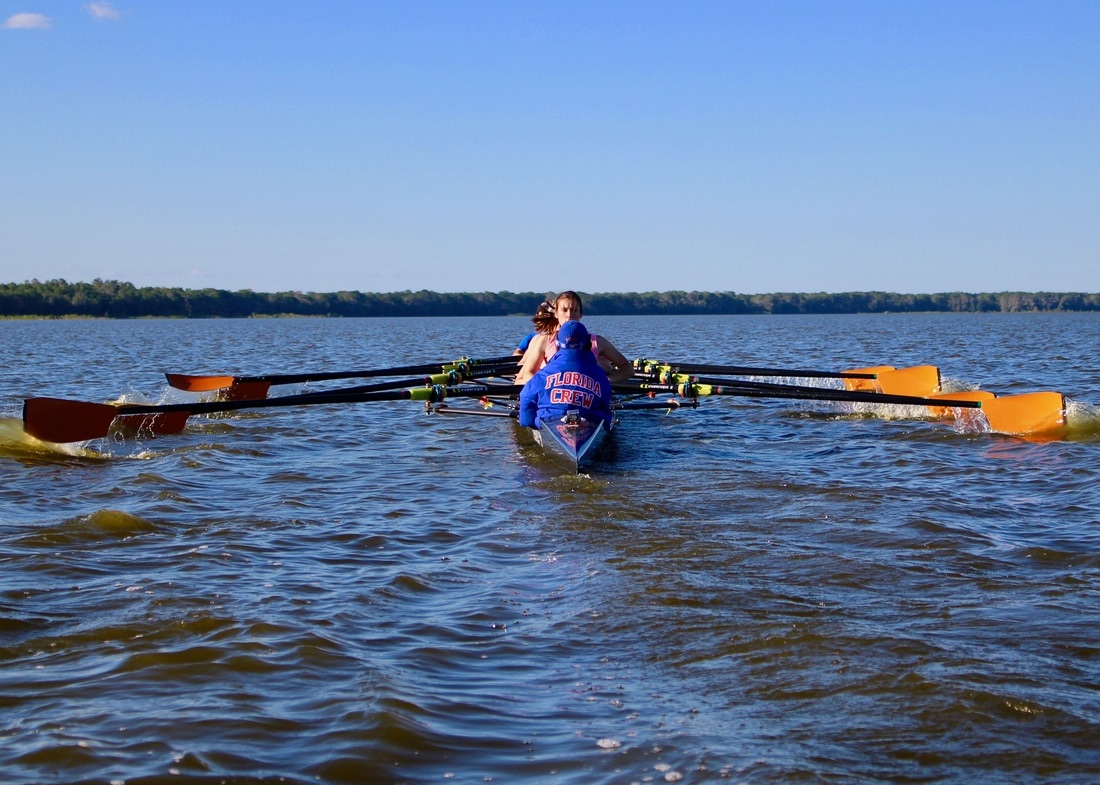 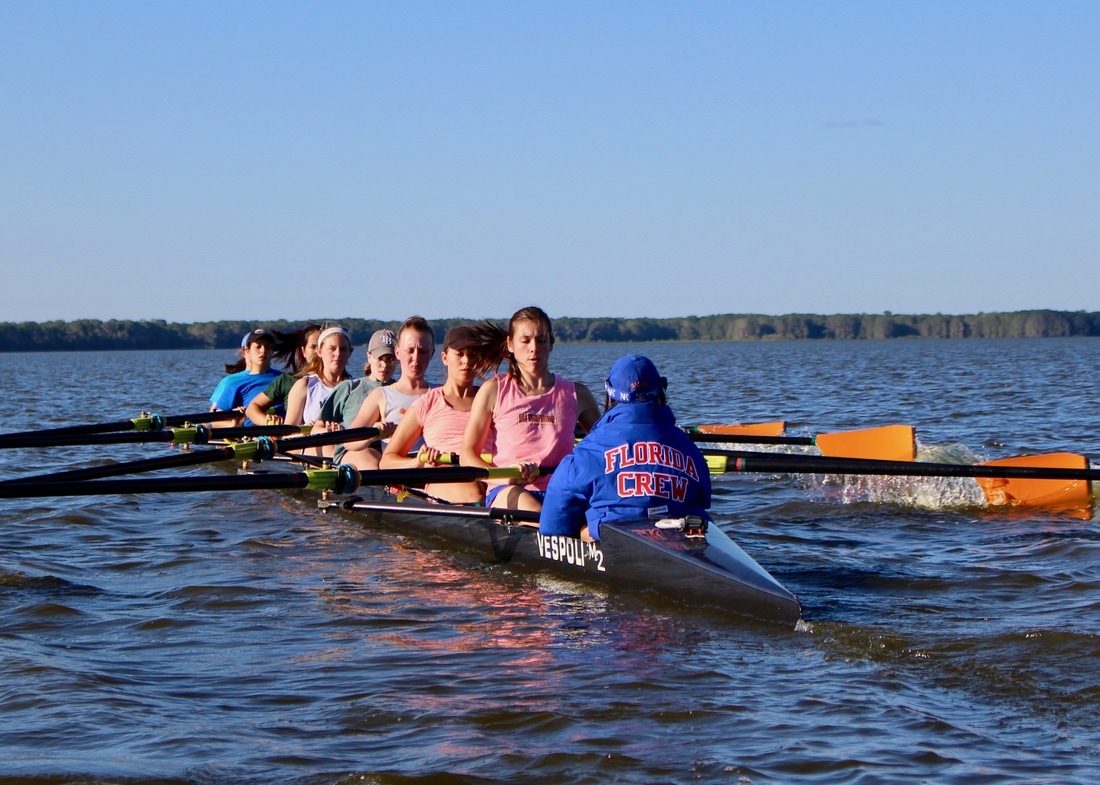 The season begins the first day of classes in August and lasts almost a month after classes end in May.

Head Coach Chris Tippin began rowing when he was a freshman at Jacksonville University after seeing a sign on campus about the sport. He then went on to coach there for four years.

Similarly discovering the sport, fourth-year rower and secretary on the executive board Alex Lopez said that the sport was not on his radar until his senior year of high school. The sport just showed up out of nowhere and caught his interest.

After doing some research on it, Lopez found that UF had a club team. So he decided to give it a try.

“I figured it out on my own and it came about from the desire and want to stay in shape, improve my fitness and try to be healthy in college,” Lopez said. “And avoid the freshman 15.”

Watching the shells glide effortlessly and slice through the water is a serene sight. However, the action of propelling the shell forward is not as easy as it looks. Lopez said that the sport encompasses both a physical and mental strength.

“For me, at least, the mental aspect is as big as the physical one,” Lopez said. “Like if you’re doing a 2,000 meter test for example, the first 500 meters you’re flying, you’re feeling fine, you think you could keep this up, you could probably go a little harder…you think ‘oh this is no big deal. I can do this.’ Right around the second 500 meter is when everything starts to hurt. Your lungs are burning and your heart is pounding. You’re like ‘oh man this isn’t going well.’ Then around the third 500 meter, that’s when if you don’t have mental strength, the wheels are going to come off if you went too hard. If you don’t have the mental strength to keep going, everything is going to fall apart cause that’s when the pain really builds up.”

Lopez admitted that when he first started, his mental strength was really bad and that he would crack a lot. However, he said it took time, practice and hitting the wall to learn not to quit and pull through.

“The easy answer is hard work,” Tippin said. “But after that, it’s giving effort that you can be proud of every single day be it athletically, academically, professionally [and] you’ll be successful.”

This is the motto coach drills every day.

President of the club Alex Hernandez gave more insight into the team’s competition schedule and why every second matter when out on the water.

“It goes by so fast and it’s awesome,” Hernandez said. “Like, everyone is going full force at once [but] one missed stroke can cost you the whole race so it’s like you really have to be in the game the whole time.”

After some reflection, Hernandez thought back to her favorite memory while being on the team.

This past weekend, the crew team competed at the Southeast Intercollegiate Rowing Association. The statistics below were provided by fourth-year rower Joey Briggs and posted on their Facebook page.

The crew team will continue to train for competitions in the month of May. The first competition is the ACRA Henley competition in Nashville, TN on May 14-15. After competing there, the team will travel to Gainesville, GA for ACRA, which is the official club national competition. ACRA is on May 27-28.

All of the club’s scores, updates and schedules can be found on their page or team website.