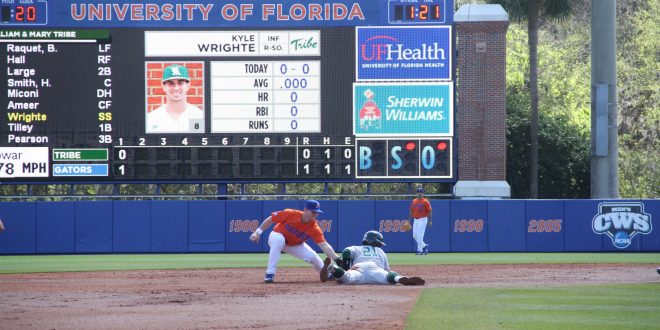 The No. 7 Florida Gator baseball team is beginning a five-game stretch at home. Their first test comes against the Florida A&M Rattlers on Tuesday night from McKethan Stadium.

Firstly, the Rattlers are currently 23-19 and hold a MEAC conference record of 11-7. They look to make it 24-19 in the midweek game against the Gators. In an interview on the Sportscene with Steve Russell, A&M head coach Jamey Shouppe would discuss Tuesday’s matchup.

Secondly, one of the key issues for Shouppe and the Rattlers this season is having their hot start derailed by a string of injuries. The team would begin the season by going 14-6 and being in the top-10 in the country for RPI. The injury plague would start with an ACL injury to A&M’s starting shortstop and continue with back surgery for their starting catcher.

Shouppe and the Rattlers are also preparing for their second SEC opponent this season. The team would travel to Auburn, as Shouppe talks about, to a 12-8 loss after leading Auburn 7-0 in the fifth.

The key for the Rattlers in this game is simply to compete, according to Shouppe. Of course, another key for them comes in the form of junior IF/P Aubrey McCarty. McCarty is a special story for the Rattlers. He possesses an ambidextrous advantage in the pitching department that few other players have. He also would start at Vanderbilt before transferring to A&M, as Shouppe recounts.

The Rattlers are hoping to use him and their competitive nature to walk out of McKethan Stadium the victors of this midweek showdown against the Gators.

Keys to Victory for the Gators

To begin, Tuesday will see the Gators looking to continue their momentum. Boasting a record of 30-13 on the season, the team is coming off of sweeping the Georgia Bulldogs on the road.

The Gators will have a five-game series at home that sees them go against the Rattlers, Jacksonville University and a weekend series against the Ole Miss Rebels.

The stretch begins on Tuesday and concludes on Sunday, with their only day of rest coming on Thursday prior to the Ole Miss series.

The team is looking to continue that momentum going into Tuesday’s game against the Rattlers. The Gators have been firing on all cylinders recently as they continue to climb the NCAA Division I rankings. They jump from no. nine to no. seven in the newest rankings. As a result of this, the team is walking into this game with something more to prove. One of the keys to victory for Florida comes by way of freshman OF/LHP Andrew Baker. Baker is getting the nod to start the game, with his longest outing coming on 3/14 in the Florida State game. He would get 2.2 IP and 4 K in his effort during that game. For this reason, Baker is receiving the starting job against A&M

In addition, the other key to victory for Florida comes by way of the bullpen. They have put up a 2.01 ERA across the previous 18 games and 53.2 total innings. The bullpen would put up a 4.81 ERA in the first 25 games of the season.

The series sweep would also mark the 30th win for their ninth season of 10 under Gator baseball head coach Kevin O’Sullivan. They look to make it no. 31 on Tuesday in this game against Florida A&M.

Tuesday’s battle between the Gators and the Rattlers will be broadcast on the SEC Network + at 6:30 p.m. from Gainesville. Of course, live, up-to-date coverage will be available by following the Gator baseball team on Twitter and here on ESPN 98.1, 850 AM WRUF.