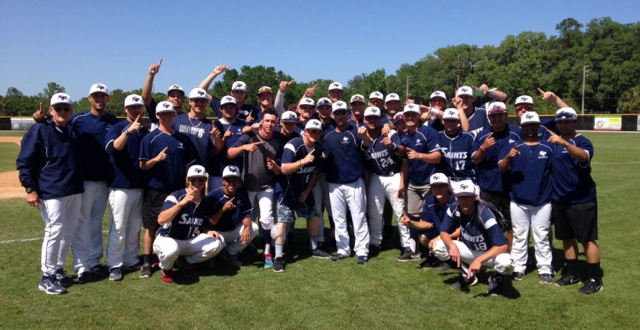 Can Santa Fe Baseball Repeat at the FCSAA Tournament?

Vying For a Repeat

The Santa Fe Saints will be fighting to repeat their run last year and win the FCSAA Championship this weekend at Joker Marchant Stadium in Lakeland. The Saints have managed to repeat their Mid-Florida Conference Championship title, by defeating Dayton back on April 21 by a score of 10-1. Ending the Season with a 36-11 overall record and 19-5 in-conference record. This gives the Saints a No. 1 seed going into the FCSAA tournament. Last year the Saints advanced to the JUCO World Series, played in Colorado, by beating Chipola College 6-4 in the FCSAA Championship.

The Saints are back to back Mid-Florida Conference Champs!!! @WiggsJohnny shows his cat like reflexes to avoid the full Gatorade bath. pic.twitter.com/PEK6ubG15D

The tournament is double elimination. So no matter the out come of Saturday’s game, the Saints will play again on Sunday either at 10 a.m. (if they lose) or 4 p.m. (if they won).

On defense, nothing can get bye Alex Goebel. Goebel was a first baseman and catcher for the team and was named Defensive Player of the Year. He has a .998 batting average with only one error on the season.

The Saints have the Pitcher of the Year, Robert Girgis. Girgis has an ERA of 2.64 and 70 strikeouts.

Troy Bacon should also be a pitcher utilized in this tournament. Bacon was named Fireman (closer) of the Year. He has the lowest ERA on the team at 1.49.

Santa Fe will play their first game on Saturday at 1 p.m. You can watch all of the tournament games on the FCSAA YouTube Channel.