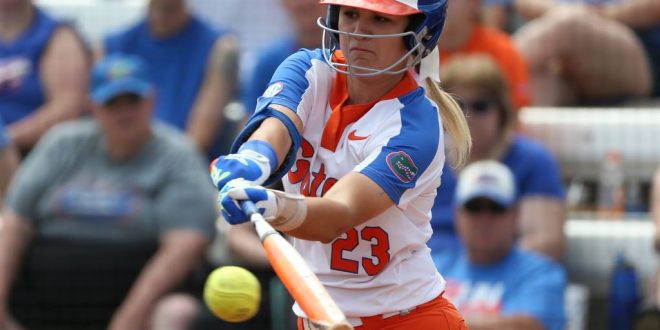 The Florida Gator softball team bounces back from a tough road loss at FSU to beat North Texas 8-0 in Gainesville on Friday.  The Gators recorded 14 hits and eight doubles on their way to victory.

Delaine Gourley started in the circle and struck out four in the first two innings.  Aleshia Ocasio relieved Gourley in the fifth inning. Offensively, the Gators opened the scoring in the third inning as Janell Wheaton sent in Kayli Kvistad and Nicole DeWitt with a two RBI double to make it 2-0.  The Gators would hit seven doubles in all in the contest.

B3 | Wheaton drives home Kvistad and DeWitt with a double to right center! #Gators on the board 2-0!

The Runs That Kept Coming

The Gators got another run when Ocasio doubled to score Wheaton that gave the Gators a run rule win after six innings.

The 47-5 Gators will face the Mean Green again Saturday and Sunday and also play Florida A&M on Sunday to wrap up the regular season.