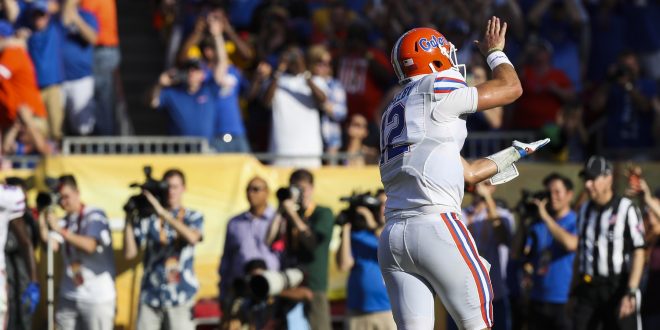 Despite the fact that no practices are taking place in college football, it does not mean that fans don’t want to hear from the head coach; in this case, Florida football coach Jim McElwain talked about his Gators and about scooter safety on campus today on ESPN Gainesville’s Sportscene with Steve Russell.   McElwain was part of a demonstration today on campus highlighting awareness for scooter safety for athletes and for anyone riding one on campus.   Students and athletes alike have suffered injuries while riding scooters and today’s demonstration about safety had McElwain’s full support.

On the football front, McElwain discussed the new rule passed in college football that will allow for an early signing period in December.  He says he goes by the rules no matter what but he also said you might be able to tell which schools are truly interested in a player and vice versa if they make the choice to enroll early.   That has been a trend with many schools; in 2012, there were a total of 67 in the top 15 classes. In 2017, there were 110.

The number of early enrollees varies each year for individual programs. For example, in 2016, the Gators had 12. This year, there were only five. The reason the total national number steadily increases is because more schools are getting involved. McElwain says he thinks the numbers could take a dip after a couple years.

A topic that is widely talked about is “Phase Five”. Phase Five refers to the Gator football players practicing and putting in their work during the summer. To the average fan, it may seem pointless for quarterbacks to throw to receivers without real game pressure or pads. However, McElwain believes Phase Five is the most important part of a football program.

Great to be back with the family for Sunday dinner tonight – on to Phase 5! Let's get to work. #GoGators pic.twitter.com/pMmgPugCpU

Another subject highlighted was spring practices. Generally, every college football program has 15 spring practices, ending with a spring football game. Most may not understand the significance of spring ball, but McElwain says it can lose or gain a player’s starting role. Spring practices can be seen as a significant advantage for early enrollees versus incoming freshman who choose not to take that route. McElwain says coaches evaluate spring practice tape often to help determine who can help the team come fall.

It will be a long summer; football practice won’t start for three more months but McElwain will continue making stops to talk to Gator Clubs about his team and about the positive momentum he sees building in the program.