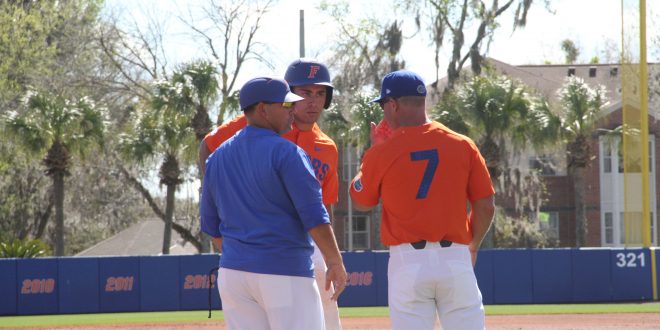 Gator Baseball Falls 6-2 to Bethune Cookman, Setting Up a Winner-Take-All

Beat a team to avoid elimination? That’s a great win.

Beat that same team for the first time in school history? Well, that’s just icing on the cake.

That’s what Bethune-Cookman (36-24) accomplished Sunday night in Gainesville, taking down regional top seed Florida (44-17) by a score of 6-2. The win was the Wildcats’ second win of the day, after beating USF in the losers’ bracket to stay alive, and sets up a winner-take-all game Monday afternoon between the Wildcats and Gators for a spot against Wake Forest in the Super Regionals.

Bethune-Cookman forces a winner-take-all game after a 6-2 victory over Florida! #RoadToOmaha pic.twitter.com/MoupPh8LSl

TJ Densmore (2-1) earned the win for BCU and freshman reliever Anthony Maldonado got his first save of the season. The freshman was huge for the Wildcats, tossing four shutout, hitless innings.

Brady Singer fell to 7-5 for Florida after going 7.1 innings and giving up four earned runs on ten hits.

“Offensively we’ve got to do a better job,” Deacon Liput, Gators third baseman, said. “I thought Brady did exactly what we need to him to do to win and we just didn’t support him enough offensively.”

The offensive support seemed limited to the second inning. Florida got two runs on three hits in the inning, with a Liput two-RBI single with the bases loaded providing the scoring.

Liput singles up the middle and two runs come home. BCU will make a pitching change.

But Florida managed just two hits and no runs the rest of the way. Apart from an error in the first inning, the only other baserunners came via two walks and the Gators never found a groove offensively after the second inning.

“We were late to fastballs,” Florida head coach Kevin O’Sullivan said. “We got beat by fastballs the entire night.”

Bethune-Cookman, on the other hand, was not late to fastballs. The Wildcats found their flow early, getting at least one hit in each of the first four innings. Overall, they managed a hit in six of the nine innings, and their ten hits off of Singer helped run up his pitch count to 112 pitches. O’Sullivan mentioned how they “were really good with two strikes.”

Especially good at the plate for the third seed Wildcats was second baseman Nate Sterijevski. He went 4-for-4 and drove in four RBIs. And when he wasn’t driving in the runs, he was scoring them, scoring the other two runs of the game for Bethune-Cookman.

The first run he drove in came in the top of the second, as the Wildcats got on the scoreboard first. He doubled down the left-field line to bring home a run, and then came across the plate himself on the next at-bat after an error from Singer allowed him to score from second.

After Liput tied the game up in the bottom half of the inning, the Wildcats were the only ones to cross the plate the rest of the way.

They re-took the lead for good in the sixth inning. Again, it was Sterijevski, this time ripping a RBI single to left field to make it 3-2.

In the eighth inning, Bethune-Cookman started a small rally that forced O’Sullivan to pull Singer. After striking out the first batter, Singer struck out Danny Rodriguez, but he made it on base after the pitch made it past catcher Mike Rivera. Singer then gave up a single and walk, loading the bases before being replaced senior Frank Rubio.

Sterijevksi was the first batter Rubio faced, and laced another single to left field, making it 5-2 by driving home two runs, with both of them earned by Singer. Bethune-Cookman managed to add one more run on a Michael Deeb double before Rubio could work out of the inning.

The Wildcats tack on 3 more in the 8th… It's 6-2 in the 8th!!! #RoadToOmaha pic.twitter.com/LRLjvbckHv

Despite eventually taking the loss, O’Sullivan didn’t place the blame for the loss on Singer.

“He was good,” O’Sullivan said. “I thought he gave us a chance to win.”

Florida was unable to take advantage of that chance though, going hitless in the last three innings. As a result, the Gators suffered their first loss both of the regional, and in school history to Wildcats after previously leading the all-time series 31-0.

Regional Final will be Monday at 4 pm – winner will head to the Super Regionals next weekend.

The all-time series between the two teams now stands at 31-1, and Florida will need to make it 32-1 if it hopes to move on to the Super Regionals and keep alive their dreams of Omaha.