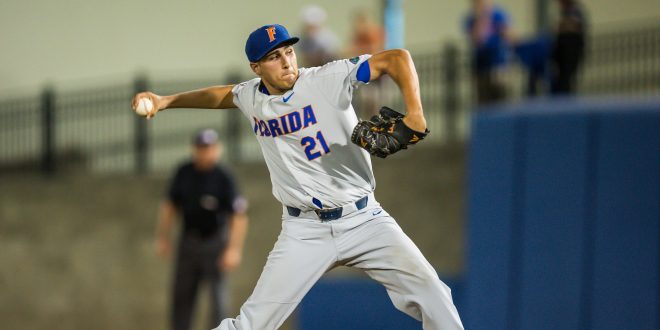 The Florida Gator baseball team worked hard and late into Saturday night to pick up a 5-1 victory over the USF Bulls in a 12-inning pitchers duel. In a game that included about a 40-minute lightning delay, Florida’s pitching managed to maintain focus throughout. With the win, Florida improves to 61-24 all-time against USF and have now won three of four NCAA Regional matchups between the two schools.

Florida ace Alex Faedo got the nod for the Gators and didn’t disappoint. He struck out 10 over the course of seven innings pitched. He gave up one earned run on four hits with two walks. Faedo was great, but closer Michael Byrne might have been even more impressive during five innings of relief. Byrne worked out of jams in the bottom of the eighth and tenth to preserve the Gators’ hopes of winning.

Saturday night was the first time Byrne has pitched more than four innings in a relief appearance this season. His eighth strikeouts match a season and career high. In his postgame comments, Florida assistant coach Brad Weitzel called Byrne’s performance “unbelievable”. “He(Byrne) can out-will a lot of pitchers out there because he’s so tough and knows how to pitch in pressure situations,” Weitzel said. “How he gets ahead of hitters, throws strikes and mixes his pitches is very impressive.”

USF pitching had almost an equally impressive performance on Saturday night, until the decisive 12th inning. Through 11 innings, USF pitching had given up a combined five hits. Shane McClanahan got the start for the Bulls but only pitched two innings. Ryan Valdes replaced McClanahan after a lightning delay in the top of the third. Valdes surrendered the only Gators’ run prior to the 12th.

Joe Cavallaro took over in the sixth and overcame a shaky eighth inning. Florida seemed to have momentum in the eighth after a pair of two-out singles from Dalton Guthrie and JJ Schwarz. The crowd erupted when South Florida catcher Andres Leal dropped a Nelson Maldonado popup in foul territory, but Maldonado was unable to capitalize on the extra opportunity.

Florida Breaks Out in the 12th

Andrew Perez followed Cavallaro with three strong innings. However, he took the loss after some sloppy Bulls defense led to a 2-1 Florida lead. Christian Hicks led off the inning with a single and was pinch run for by Blake Reese. After a Deacon Liput strikeout, Reese advanced to second on a throwing error by Perez. The Bulls then committed a second throwing error while attempting to throw out Reese at third. Reese then scurried home to put the Gators on top.

However, Florida was not content with a one-run lead. Jonathan India walked after a one-out single to center by Nick Horvath. The runners then moved up to second and third base on a wild pitch. After a Guthrie walk to load the bases, Horvath scored on a Schwarz groundout to second to extend the Florida lead to 3-1. A two-RBI single from Maldonado then grew the Gator lead to 5-1 and put the game out of reach.

Bethune-Cookman eliminated Marist on Saturday afternoon and will now face USF. The two teams met in the Gainesville Regional opener on Friday. USF won by a score of 9-1. The winner of that elimination game moves on to face Florida.

I'm an above-average golfer with surprisingly great touch around the greens. Click on my twitter link for some sports talk.
@Ry_McGinn
Previous NCAA Regional Baseball: Bethune-Cookman Defeats Marist, Faces UF-USF Loser Next
Next Gator Baseball Falls 6-2 to Bethune Cookman, Setting Up a Winner-Take-All