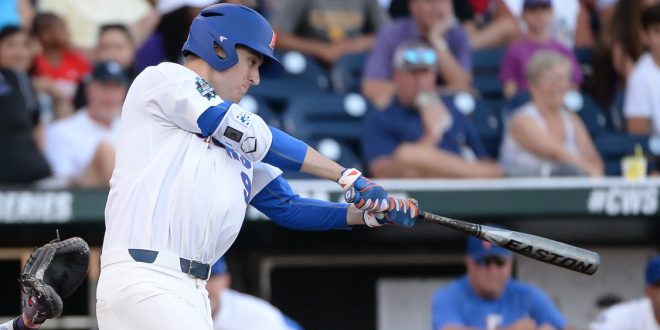 With each team coming off of wins in their opening game of the College World Series, Florida will take on Louisville in a winner’s bracket matchup Tuesday night. Whoever wins will really be in the driver’s seat for a spot in the championship series, needing only one more win afterward to make it to that point.

The Gators showed why their pitching can carry them deep in Omaha on Sunday night. Faedo turned in a gem of an outing, tossing 7.0 shutout innings to go along with 11 strikeouts. Michael Byrne then came in and got a six-out save, his 17th of the season. The pitching was helped out by excellent defense, especially from Mike Rivera behind the plate with a couple of pick-offs.

Tuesday night, Florida will be hoping to get another good pitching outing in the form of Brady Singer. The sophomore righty comes into the matchup with a 7-5 record and 3.29 ERA, but he’s stepped up his game in the NCAA Tournament.

Through 13.1 innings of work in three appearances, he’s allowed just four earned runs while striking out 19 batters. Singer pounded the strike zone with his rocket of a fastball, and Wake Forest, one of the best hitting teams in the country, struggled with that and Singer’s tempo on the mound. If he can replicate that against a good hitting Louisville team, Kevin O’Sullivan has to like his team’s chances.

At the plate, Florida played good small ball against TCU, and despite leaving some runners on base (10), was opportunistic nonetheless in scoring their three runs. The Gators’ lineup had been in a bit of a slump in NCAA tournament play, batting just .226 in the 10 games before TCU. On Sunday night though, Florida put up nine hits on a previously unbeaten, All-American pitcher in Jared Janczak, and everyone with an at-bat in the game reached base at least once, save for Jonathan India.

Nelson Maldonado and Dalton Guthrie led the charge with two hits each, with Maldonado adding a RBI and Guthrie a run. Maldonado suffered a bit of an injury scare after appearing to hurt his ankle rounding third base in the fifth inning of Sunday’s game, but O’Sullivan said the right fielder should be good to go. That’s definitely good news for Florida as the junior has been the best hitter on the team all season with a .310 average.

If there’s one player on Louisville most people are familiar with, it’s Brendan McKay, and for good reason. The junior do-it-all for the Cardinals won the Dick Howser Award for the nation’s best college baseball player after a stud year both at the plate and on the mound.

The good news for Florida is that they won’t see him on the mound, starting at least, as he started and picked up the win against Texas A&M, his 11th win of the season.

The bad news for Florida is that they’ll still see his bat standing out among a good Louisville lineup that features four guys batting over .300. McKay, recently taken with the 4th overall pick in the MLB Draft by the Tampa Bay Rays, is one of those big hitters, hitting .340 with 17 homers and 56 RBIs on the season.

Another big bat in the lineup is that of infielder and first-team All-American Drew Ellis. Ellis comes in batting .366 on the season and has some power to go along with that. He ranks 10th in the country with 20 home runs, and his .729 slugging percentage is 7th best in the nation.  The other starters batting over .300 are outfielder Josh Storey (.311) and shortstop Devin Hairston (.306). Hairston is also the ACC Defensive Player of the Year after recording a .987 fielding percentage and just three errors on the season.

He and the rest of the Louisville infield will be playing behind junior right-hander Kade McClure, who’ll start on the mound Tuesday night. McClure enters the matchup at 8-3 and with 3.43 ERA. McClure also carries strikeout potential, with 102 K’s in 97 innings pitched this season.

And in the closer role, Louisville is one of the only teams that can match the firepower that Florida brings with Byrne. First-team All-American and Stopper of the Year finalist Lincoln Henzman is just behind Byrne in saves with 16 and was effective all year with just a 1.77 ERA. A close game down the stretch could pit two of the best closers in the college game against each other on the biggest stage.