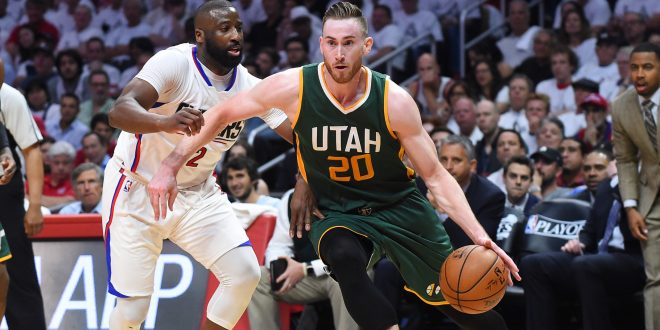 Hayward Picks The Celtics and Other NBA Moves

Without a doubt, Gordon Hayward was one of the most coveted free agents on the NBA market. The Utah Jazz wanted to keep him; they brought in Ricky Rubio and Rudy Gobert to their meeting to try to sway him back to Utah. Ultimately, Hayward decided to join one of the most storied franchise in the NBA.

Boston Gets Their Man

It came down to three teams; Jazz, Celtics, and Heat. Staying in the Western Conference meant an uphill battle against Golden State while fending off teams who have bolstered their rosters like the Rockets and Thunder. Going to one of two great franchises in the Eastern Conference, who both have history of winning championships, while only having to surpass Cleveland seemed like the smarter move.

Ultimately, the decision to join Boston makes sense. Hayward reunites with his college coach Brad Stevens, who coached Hayward at Butler in 2008-2010 and almost won a national championship. He fills the gap of having another perennial scorer next to Isaiah Thomas and he can stretch the floor well for Al Horford.

At last look, the addition of Hayward puts the Celtics at 10/1 odds to win the Finals next year.

The tough decision that could loom for Boston is the need to get rid of one of three key rotation players; Avery Bradley, Marcus Smart, or Jae Crowder. The Celtics might need to move one of them to create cap space to fulfill Hayward’s contract.

Late last night, ESPN reported the LA Clippers have acquired Danilo Gallinari in a three-team sign and trade deal. The contract is reportedly worth $65 million over three years.

The Clippers have coveted Gallinari for years and adding him this year helps their lineup after losing Chris Paul to the Rockets.

This acquisition does come at a heavy price. Los Angeles is shipping Jamal Crawford, Diamond Stone, a 2018 first round pick and cash to the Atlanta Hawks. The Hawks will send a 2019 second-round to the Denver Nuggets.

Restricted free agent Otto Porter Jr. reached an agreement with the Brooklyn Nets, giving him $106 million over four years. The Washington Wizards will have until 11:59 P.M. Saturday to match the offer and retain Porter in D.C.

According to Tim Botemps of the Washington Post, the Wizards have never paid the luxury tax and if they keep Porter they will have to pay it next year. In a team that includes John Wall and Bradley Beal, Porter will be the highest paid player in Washington if the Wizards sign him.