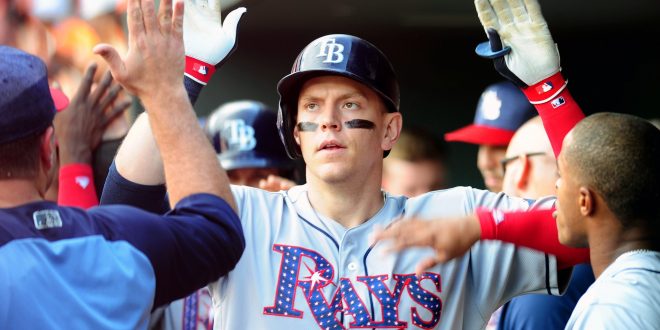 On July 4, the sky wasn’t the only place to see fireworks. Before a 6-5 win versus the Cubs, Rays first baseman Logan Morrison, who’s tied for third in baseball with 24 HR, didn’t hold back when asked about the home run derby.

The lefty was irked by Yankees catcher Gary Sanchez’s inclusion in the competition. Sanchez, who missed a month with injury early in the season, has 13 home runs on the season, tied for 73rd overall.

“Gary shouldn’t be there,” Morrison said. “Gary’s a great player, but he shouldn’t be in the Home Run Derby.”

The exclusion doesn’t disappoint him, Morrison said. Instead, he blamed it on his team. He implied that because he’s part of a small-market team that performs poorly in attendance and national attendance, it’s easy to overlook him. He pointed to MLB Network mistakes as proof, citing that they showed footage of Corey Dickerson when actually referring Morrison.

On Wednesday, Morrison tried to clarify the previous day’s comments.

However he still strongly believes his team situation is a detriment.

Does playing for small mkt #Rays lead to getting slighted? Morrison: "That's the most obvious answer to a question in the history of world"

The decision process, determined in consultation with the players union, includes factors beyond current home run totals such as popularity, All-Star status, being a member of the host team and performance in previous seasons.

If contestants are selected based on that criteria, Sanchez’s inclusion makes more sense. He burst onto the scene last year hitting 20 home runs in just 53 games, tying the record for fastest player to reach that bench mark in a career.