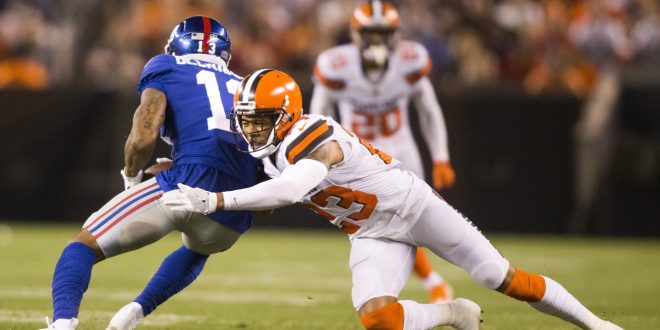 Starters were expected to play the entire first half of the game on Monday when the Giants faced the Browns. This was to save the starters from any potential injuries. Unfortunately, injuries are inevitable in football. After struggling in the first quarter, the Giants finally entered Browns territory in the second.

It had come at a cost.

Browns Cornerback Briean Boddy-Calhoun hit Beckham low as he jumped to catch the ball, upending him. The hit caused the entire state of New York, and many Giant fans around the world, to collectively hold their breathe as they watched their star Wide Receiver get up and limp off the field.

Beckham did not return to the game and was helped to the tunnel to find out how serious his injury was.

Giants Quarterback Eli Manning was asked after the game if there was something he could have done better. Manning felt he made the right throw but it was just an unlucky result.

After the game Beckham was diagnosed with a simple ankle sprain, so it was not as serious as previously thought.

Reactions on social media, including Beckham himself, expressed their relief after this news came out.

While many are relieved that Beckham’s injury is not serious, most do not know if he will play again until the regular season. Beckham was asked in an interview if he would play in the preseason again. He was unsure.

Beckham’s injury also sparked a different reaction as well. Many took this moment as an opportunity to speak out on the pointlessness of the preseason and the injuries that come out of it. Former college teammate and Dolphins Wide Receiver Jarvis Landry was one who expressed his frustration at injuries like Beckham’s happening in games that don’t count. Landry took to twitter saying “This is why I hate preseason b*******.”

At this point, it is hard to disagree with him as many people, players and fans, have called for a shortening of the preseason to reduce injuries. Commissioner Roger Goodell has considered it, but only to extend the regular season.

Browns Head Coach Hue Jackson immediately came out to defend his player. He said that the hit was not of malicious intent and it was legal.