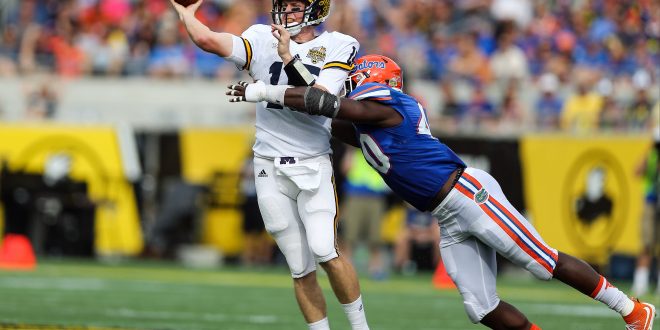 Preview: Gators Football Kicks Off Season Against Michigan in Dallas

The waiting is over for the Gators.

After months of anticipation, Florida will kick off their 2017 football season against the Michigan in Dallas on Saturday. While it’s only the first game of the season, a win for either team would provide season-long momentum.

Entering Jim McElwain’s third season at the helm, the biggest question for Florida was who would take the first snap at AT&T Stadium. After a competitive quarterback battle with Malik Zaire and Luke Del Rio, Feleipe Franks emerged on top. McElwain made it official on Wednesday.

Franks will become the first redshirt freshman quarterback to start a season opener for Florida since 1988. The former four-star recruit comes with a big arm that can make throws everywhere on the field. While he showed promise in the spring game, Saturday will mark his first real game at the collegiate level. It’s a tough test for anyone to make their debut against Michigan, much less under the lights in Jerry World. He’ll be tasked with leading the turnaround of what was only the 79th ranked passing attack in the country last season, and an offense that was 107th in scoring.

Correction: Feleipe Franks will become the first redshirt freshman to start a season opener at QB for the #Gators since Kyle Morris in 1988. pic.twitter.com/Zbyefl9Fql

Franks’ job won’t be made any easier by the suspensions handed down for this game. Ten players are suspended for Florida, including two starters in wide receiver Antonio Callaway and running back Jordan Scarlett.

Having to step up in their absence will be sophomores Tyrie Cleveland and Lamical Perine. Cleveland showed flashes throughout last season, especially his 98-yard touchdown against LSU. Perine also played well in the win over LSU, and ran for over 100 yards in the win over Kentucky.

Other players who can expect to see increased roles are wide receiver Josh Hammond and running back Malik Davis. McElwain said the Davis will play “a ton” on Saturday. Hammond is listed as one of the starters on the unofficial depth chart released this week.

The bright spot for Franks and the offense is that the offensive line appears to be a strength of the team for the first time in McElwain’s tenure. Center TJ McCoy said during the week that McElwain has put the game on them and the defensive line.

Speaking of the defense, while on paper it may seem young, they are far from inexperienced. The trio of sophomores Kylan Johnson, David Reese and Vosean Joseph all saw extended play time last year because of injuries. They will anchor down the linebacker spots alongside redshirt freshman Jeremiah Moon.

In the secondary, Seniors Nick Washington and Duke Dawson will start alongside Marco Wilson at corner and Chauncey Gardner at safety. Up front, the Gators are loaded with familiar names like Taven Bryan, Cece Jefferson, Jabari Zuniga, Khairi Clark, Jordan Sherit. The same can be said about the special teams with All-SEC selections Eddy Piniero and Johnny Townsend returning for the Gators.

Florida isn’t the only team coming into the game with a debate at quarterback.

Michigan head coach Jim Harbaugh hasn’t announced who his starter will be for Saturday’s game, with Wilton Speight and John O’Korn battling all summer for the nod. If Harbaugh chooses to go with experience, then Speight will get the nod. Speight was named the most improved player on the team last season after starting 12 games for the Wolverines, throwing for over 2500 yards and 18 touchdowns. O’Korn, who is the more mobile of the two, had a good camp according to multiple reports, and did play in eight games last season.

No matter who the starter is, Michigan’s goal will be to establish the run so they can test the Florida secondary with play action. Michigan achieved that balance last season, averaging 212.9 pass yards and 212 rush yards per game. As a result, they lead the Big Ten in five offensive categories last season.

That style of play has been a Harbaugh staple going back to his days in the NFL. Chris Evans, the second leading rusher on the team last year (614 yards, four touchdowns), will look to thrive in Harbaugh’s system this year. Also returning are two starters on the offensive line in guard Ben Bredeson and center Mason Cole. In the receiving core, Harbaugh has two freshman studs set to make their debut in Donovan Peoples-Jones and Tarik Hill. Sophomore Kekoa Crawford and upperclassmen Grant Perry round out Michigan’s starting wideouts.

The primary strength of this team lies on the defensive side of the ball. The Michigan defense in part to the coaching of defensive coordinator Don Brown. Brown has led the top ranked defenses in college football for the past two years: Michigan in 2016 and Boston College in 2015. Apart from leading the nation in total defense, they also led in pass defense and ranked second in scoring defense. And while Michigan lost 10 of its 11 starters, they have plenty of talented guys ready to fill in.

Maurice Hurst and Rashan Gary form one of the most formidable defensive line duos in the country. Hurst tallied 11.5 tackles for loss and 4.5 sacks last season, while Gary was named an AP preseason second-team All-American selection as only a true sophomore. Chase Winovich can also wreak havoc on the outside, posting 9.5 tackles for loss and five sacks last season. How the Florida offensive line contains them will be a key factor in the outcome of the game.

Congrats to @RashanAGary — named to the preseason #APAllAmerica Second Team!

They’ll combine to anchor the front seven alongside senior linebacker Mike McCray. McCray is the only returning starter for the Wolverines defense and a team captain for this season. McCray notched a career-high 76 tackles last season, and will provide much-needed leadership to a talented but young defense.

Youth in the secondary

Nowhere is that youth more pronounced than in the secondary, where the Maize and Blue replace every starter, including some players currently on NFL rosters, like Jabrill Peppers and Jourdan Lewis. Sophomores Lavert Hill and David Long got plenty of action last year and will step into bigger roles. None of these roles have been made official, however, since Harbaugh has not yet released a depth chart (that’s also been a topic of conversation during the week, the gamesmanship between him and Jim McElwain). Florida is deep at receiver, and Franks could look to test the young secondary with Cleveland and Brandon Powell, and his tight ends Deandre Goolsby and C’yontai Lewis.

This will be the first time the teams meet in the regular season. The teams have met three times before in bowl action, with Michigan winning all three of the previous matchups.