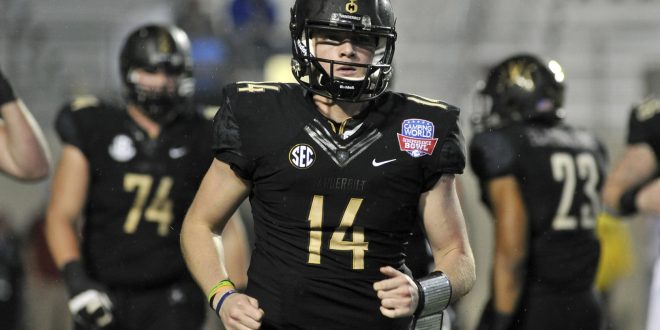 The Vanderbilt Commodores will go head to head with their neighbors, the Middle Tennessee State Blue Raiders in their first game of the season.

With the stadiums just 35 miles apart from each other, it would seem that these two teams get to see each other quite a bit. In reality, these teams have only played each other 17 times, with Vandy leading the all-time series 14-3.

Last time these two played, the Commodores took the win at home 47-24. The year before that, Vanderbilt handed them a 17-13 defeat at Floyd Stadium.

Coach Derek Mason said his team, coming off of a great season last year, is ready for the task this Saturday.

“We’ve been in game prep for about 10 days now,” Mason said, ” and are really at the end of this and are ready to play someone other than ourselves now.”

Mason said MTSU’s offense is all about “speed and space.” In order to defend it, he said it all comes down to physicality on the perimeter.

The starting quarterback for the Commodores is Kyle Shurmur, who is a familiar face for Vandy fans as he started all of last season for the team. Leading an offense last year he averaged 185.3 yards passing per game.

A big question going into this game is: Will Vanderbilt break their streak of losses in season openers? Vandy hasn’t won a season opener since 2013.

Mason said the losing streak is a like chip on his shoulder.

According to VUCommodores.com, “It sits there, it stares me in the face every day. I haven’t let this football team forget it,” Mason said. “Everyone can talk about what MTSU is playing for, but I know exactly what we’re playing for.”

Vanderbilt and Middle Tennessee will kickoff at 7 PM Central this Saturday. The game will be televised on CBS Sports Network.