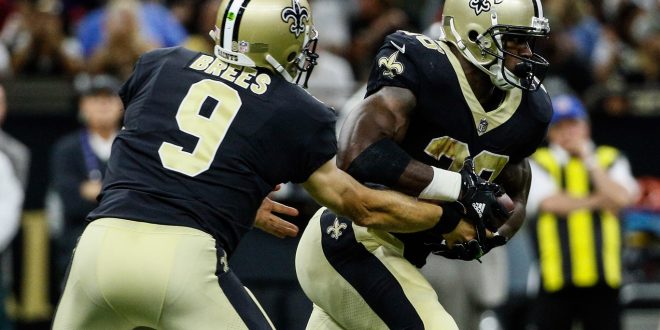 Aug 26, 2017; New Orleans, LA, USA; New Orleans Saints quarterback Drew Brees (9) hands off to running back Adrian Peterson (28) during the second quarter of a preseason game against the Houston Texans at the Mercedes-Benz Superdome.

Week 1 More Than a Regular Season Opener For Adrian Peterson

For most NFL players, the first week of the season is about starting off on the right note.

For Adrian Peterson, the first game of the season is about getting revenge against a former team. The 32-year-old running back played 10 seasons in Minnesota but left the organization with a sour taste in his mouth. Before Sunday’s match-up between the Saint and the Vikings, Peterson said that he did not like how the Vikings did not stand up for him during his child abuse scandal in 2014.

The 2012 league MVP said he made the decision to move on from the Vikings long before this off season. “I voiced my opinion back then,” Peterson said. “The decision to want a change of scenery was due to what transpired two years ago.”

A change in pace

The seven time Pro-Bowler won’t have the role he is used to having with the Saints but he still expects to have an impact on the game. Peterson is currently backing up Mark Ingram, who is entering his seventh season compared to Peterson’s 11th. Peterson says that he usually has a chip on his shoulder every time he plays but this week’s match-up means more.

Not all about AP

While Peterson’s return to Minnesota is grabbing all the headlines, Vikings head coach Mike Zimmer has his attention elsewhere. He hopes that his team also has a chip on their shoulder when the teams kick off on Monday night.

While Zimmer was adamant that the game was “not all about Adrian Peterson,” the addition of the former Viking does add another weapon to the New Orleans arsenal. Zimmer says that the he expects the usual game plan from the Saints which features plenty of running plays and play action passes.

With the Adrian Peterson Era coming to an end in Minnesota, the Vikings drafted FSU standout Dalvin Cook in the second round of this years draft. Cook rushed for over 4,000 yards and 46 touchdowns in his three years at Florida State.

The Saints and Vikings will face off in the first game of the Monday night doubleheader, the game is set to begin at 7:10 p.m.