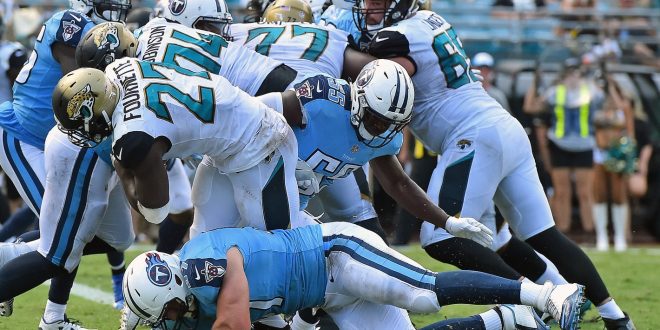 The Jaguars create excitement around Jacksonville

The Jacksonville Jaguars did something for the first time since 2011; they started out their season 1-0. After an impressive showing for Jacksonville’s defense in the opening weekend of the NFL season, the team was unable to keep up that momentum against the Tennessee Titans in the team’s home opener at EverBank Field on Sunday. The Titans beat the Jaguars 37-16.

Jags quarterback Blake Bortles finished the game with 223 total yards and two interceptions and Bortles says that there were two key factors that contributed heavily to the loss on Sunday.

Jacksonville’s defense led the NFL heading into the game on Sunday. The Jaguars held the Texans to a total of 203 yards in the opener but were unable to stop Marcus Mariota and the Titans with the same intensity. Tennessee finished the game with a total of 390 yards while the Jaguars finished with a total of 310 yards of offense.

Jaguars defensive end Dante Fowler said that the Jaguars’ game plan consisted of preparing for the physicality they knew that they were going to face on Sunday.

Jacksonville’s defense held the Titans to just two field goals in the first half before letting the Titans into the end zone near the end of the third quarter for the first touchdown of the game. Fowler thinks that although there is room for improvement, the defense was able to execute throughout the game.

Jags defensive lineman Calais Campbell expressed how he was eager but confident after the tough loss; he feels that the team will benefit from this loss in several different ways.

Campbell played an integral role in the Jaguars defensive performance last week. Campbell had a total of four sacks against Houston; this week, Campbell finished the game against the Titans with four tackles and no sacks.

The Jags forced the Titans into one interception but Tennessee seemed to be comfortable in their offensive plan throughout the game. Campbell says how the turnovers will be vital in order to win ball games for the team in the future.

The Jaguars are now 1-1 on the season. The teamw will look to add another win to their record as they make the travel to London to play the Baltimore Ravens at Wembley Stadium.