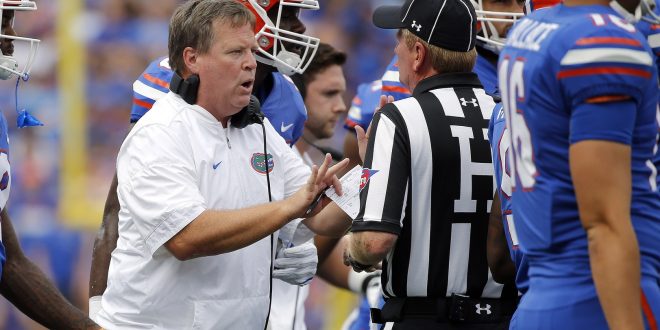 Some may argue that Jim McElwain’s first two years at the helm of the football program have been a success, while others may politely (or impolitely) disagree. McElwain has led the Gators to a 20-9 record, with only one non-ranked loss to Arkansas last year. However, the Gators have not fared well against ranked opponents, going 3-8 during McElwain’s current tenure. On the other hand, Florida has been to the SEC Championship Game the past two seasons and has improved immensely since the Will Muschamp era.

McElwain has certainly never lacked confidence in himself and his team. His outgoing personality kept his player’s spirits high after a disheartening beat down from Michigan. The former Colorado State coach always looks forward, which is why he is focused on beating an improved Kentucky squad instead of fixating on the unbelievable win against Tennessee. In all honesty though, how could someone not want to live up this moment forever?

While Coach Mac always tries to look forward, he does give necessary praise when it’s due.

McElwain applauded freshman quarterback Feleipe Franks for staying poised and in control during his first home opener. He attributed this to the confidence he has, not only as a quarterback, but as a leader.

After getting pulled from the Michigan game a few weeks ago, McElwain gave Franks a clear opportunity to prove himself as the lead quarterback against Tennessee. He went 18-28 with 212 yards and two touchdowns. He did throw an interception, but that’s expected for a freshman quarterback playing his first game at home in front of 89,000 people.

McElwain also praised true freshman cornerback C.J. Henderson, who has recorded two pick-six’s in as many weeks. The Miami product was named SEC Freshman of the Week.

According to Florida’s press release, “He became the first Florida freshman to record a pick-six in back-to-back games in program history and the first Gator to do so according to records dating back to 1973.” Henderson has been excellent for the Gators, who could use all of the help they can get with the potential absence of Duke Dawson (head injury) and an inexperienced secondary.

Florida has won 30 straight games against Kentucky, but McElwain isn’t underestimating the Wildcats. They are 3-0 on the season after defeating a quality South Carolina team on the road.

McElwain pointed out that the Wildcats’ defense plays each quarterback and offense differently, which is very difficult to prepare for.

He also mentioned that head coach Mark Stoops has done a great job with his team so far this season, especially on defense. McElwain credited their defensive line for making key stops in key situations.

The Gators squeaked out a 14-9 victory the last time both teams faced off in Lexington in 2015. It wouldn’t be surprising if another defensive showdown is the product of this game.

Florida is currently a four-point favorite in Vegas, but anything can happen with SEC football. Coach McElwain described this upcoming challenge perfectly: it’s going to be “a heck of a game.”