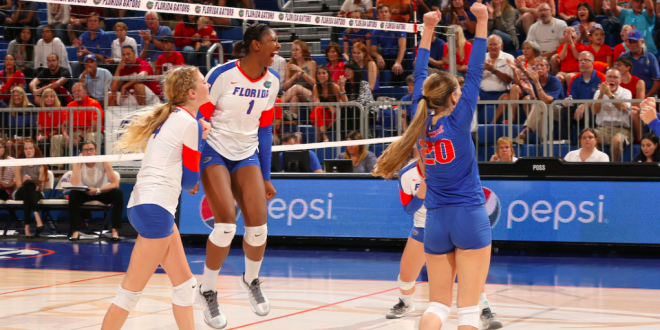 No. 3 Florida Gators plan to continue their fantastic start of the season when they host the Florida State Seminoles at the Fresh from Florida Sunshine Showdown.

The Gators are still unbeaten this season. They have a 7-0 record, but three of their scheduled games were canceled due to Hurricane Irma.

The Gators come into this matchup statistically strong. Let’s start with the fact that Florida is one of only three teams around the nation that have been able to beat three ranked teams. The Gators have a 39-20 lead over the Seminoles historically. They are 32-6 under head coach Mary Wise.

There are a few Gators who have showed individual dominance during this season. Rhamat Alhassan has been able to use her quick decision-making and athleticism to be a defensive force for the Gators. Alhassan is the nation’s leader in blocks per set (2.04); she was named the SEC Player of The Week after her solid performance during the weekend, in which she made 28 kills and 26 blocks.

Carli Snyder, Cheyenne Huskey and Rachael Kramer are other Gators who have shown high-level performances during the season. Snyder has used her shooting accuracy to lead the SEC and be second in the nation in service aces per set (0.68). Like Alhassan, Huskey has used her defensive mindset to make her opponents’ lives hard; she currently averages 1.45 blocks per set. Offensively, Kramer has tried to be as effective as she can in comparison to last season; this season, she is leading the SEC and is fourth in the nation in hitting percentage (4.88). Collectively, the Gators are dominating the game on every aspect; they are currently on the top-5 in hitting percentage, opponent hitting percentage (first place), assists, kills, blocks (first place) and digs (first place) among SEC teams.

Journalism student at the University of Florida. Venezuelan and future sports journalist.
@joseso2793
Previous UF Quarterback Feleipe Franks to Get First Road Start of Career
Next McElwain Anticipates “Heck Of A Game” Against Kentucky