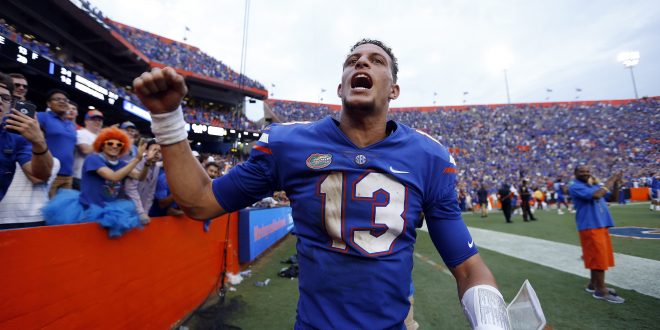 UF quarterback Feleipe Franks passed a major test last Saturday when he helped the Florida Gators defeat the Tennessee Volunteers thanks to a 63-yard touchdown pass to Tyrie Cleveland as the game came to an end. That moment temporarily brought life to a team that had been plagued with quarterback issues since Tim Tebow. Franks will get a chance to build up on his performance when he and the Gators travel to Lexington, Kentucky this Saturday to take on the Kentucky Wildcats.

Great memories made in The Swamp last weekend! Time to move forward and get better this week. #GoGators pic.twitter.com/jXBQRnA0Qw

Florida vs. Kentucky: The Numbers

What Florida Needs to Fix

Franks made it very clear that he and the team need to cut down on the turnovers. So far through two games, the Gators have six turnovers. Against Michigan, Franks fumbled the ball twice, losing one of them. He turned the ball over again against Tennessee when he threw an interception.  The Gators will have their work cut out for them this Saturday against a Kentucky team that has forced seven turnovers through three games.

How Kentucky Has Done So Far

Kentucky is off to a 3-0 start. While the offense has struggled to muster up points (only averaging 25 points per game), the defense has led the way. The Wildcats are giving up 347 yards per game, which is 52nd in the nation. However, they have been one of the best at preventing teams from scoring, allowing 15 points per game.  Their defense will get tested this Saturday against Franks and the Gators’ offense.

Florida and Kentucky will play this Saturday at 7:30 p.m. in Lexington, Kentucky. The game will be on SEC Network.