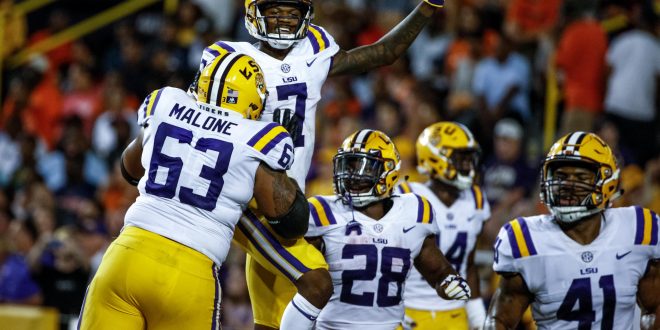 The Tigers have some non-conference action in week 5, squaring off against the Troy Trojans. The two teams haven’t played each other since back in 2008, when LSU came out with the impressive 40-31 win.

This is the last chance LSU will have to get in gear before taking on a conference opponent. This is also LSU’s homecoming game, so Tiger fans are hoping for nothing less than a blowout against the Trojans.

Junior running back Derrius Guice and sophomore Rashard Lawrence are questionable going into this week’s game. Guice’s injury remains undisclosed, although Orgeron states that he does not regret playing him against Syracuse. For Lawrence, his status has been upgraded to questionable after being ruled out against Syracuse due to an ankle injury. Neither player has practiced this week after being unable to finish out the Syracuse game.

The Tigers are currently ranked 25th in the college football standing and now they’ll look to improve on their 3-1 record. In last week’s game against Syracuse, quarterback Danny Etling threw for 188 yards and 2 touchdowns, leading LSU to a 35-26 victory. Running back Darrel Williams had a game of his own, with 16 carries for 92 yards and a touchdown.

LSU football head coach Ed Orgeron says he’s eager to see the matchup and how his team executes on both sides of the ball.

After a shaky 3-1 start to the season, the Trojans are hoping for an upset going into week 5.

With key players out for LSU, now is the time for the Trojans defense to cause pressure. This will be a true test for the front seven, giving up an average 96 yards per game.

The Trojans are 42nd in the nation in passing offense with 273.3 yards a game and 60th in the overall college football standing. The Trojans recently played the Akron Zips, where they forced three turnovers while committing only one.

If Troy can keep up with LSU’s fast paced defensive line and maintain pressure the whole game, we may witness an upset over LSU.

The Trojans will travel to Death Valley for a 7 PM kickoff this Saturday.