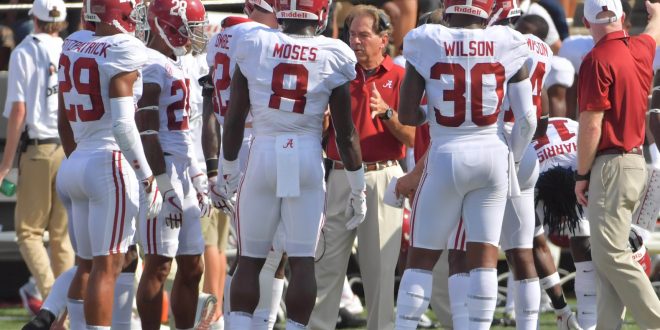 No.1 Alabama Prepares for Ole Miss

No. 1 Alabama just demolished Vanderbilt last weekend 59-0. Now the Crimson Tide must move on and prepare for Saturday’s SEC matchup against the Ole Miss Rebels. Kickoff from Bryant-Denny Stadium is set for 9 p.m.

Alabama is 4-0 heading into this weekend’s match-up. The team has been in practice all week trying to put together a gameplan that will help them succeed against a strong Ole Miss offense. Alabama football head coach Nick Saban says how the team is preparing to go up against the Rebels.

The matchup against Ole Miss will also be Saban’s 55th career game coaching Alabama as the Associated Press No. 1 team. However, winning doesn’t come easy. Coach Saban says you have to want to win both physically and mentally.

The Rebels are top-ranked for total offense in the Southeastern Conference with an average of 496.7 yards per game. Coach Saban knows this is one of their strengths and Alabama needs to prepare defensively.

The Rebels will be coming into Saturday’s game 2-1. Going up against Alabama, Ole Miss understands the importance of stopping Bama’s running game. Ole Miss head coach Matt Luke says it’ll be difficult to contain The Crimson Tide, but he’s ready to accept the challenge.

The Rebels lost to Berkeley last weekend due to missed tackles from the defense. The Rebels’ top-ranked offense will be their key to winning this weekend’s game. Coach Luke says if the Rebels run the ball consistently, they have a better chance against the Crimson Tide.

Ole Miss starting center Sean Rawlings may not play against Alabama after having surgery last week to repair an ankle injury. Coach Luke says his team needs to stick with their game plan and maintain their pace playing against a No. 1 team.

After taking on the Rebels, Alabama will head to Texas to take on Texas A&M next Saturday. Their game will start at 6:15 p.m.

Meanwhile, the Rebels will take on another SEC match-up against Auburn. Their kick off will start at 11 a.m.