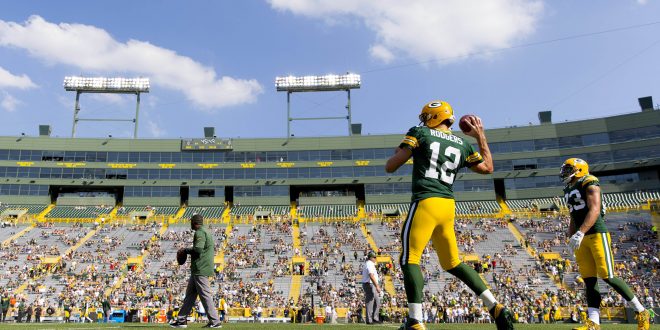 The Green Bay Packers return home to take on the Chicago Bears in this week’s Thursday Night Football match up.

On Sunday, Aaron Rodgers had an incredible game in a win over the Cincinnati Bengals. He help lead his team to a 27-24 overtime thriller. Just four days later, the team returns home to Lambeau Field, where Rodgers will look to continue a up-tempo play. Bears head coach John Fox said that there are many aspects that make Aaron Rodgers a unique quarterback.

Rodgers comes into this game with impressive numbers. Some of his totals in three games this season include 89 completions for 967 passing yards. Last week against the Bengals, Rodgers had three touchdowns, which is his highest single-game total this season. Despite doing so well, Rodgers knows that he and his team are facing a strong Chicago defense.

The Injury Bug has affected both teams so far this year. With a shortened rest time for the Packers, some players are still questionable. Here’s the latest injuries for both teams.

The Packers-Bears match up is the longest standing rivalry in the National Football League. The overall record is 94-94-6. During his time with Green Bay, Rodgers has a 15-4 record against Chicago. Green Bay head coach Mike McCarthy said that he and his team are fully aware of the intensity of the rivalry and they take it very seriously. If the team should come out with a win, they would give lead the rivalry for the first time since 1932. However, Green Bay’s defense will have a difficult chore on their hands in trying to maintain Chicago’s running backs, Jordan Howard and Tarik Cohen. Together, the two have a total of 254 running yards.

As many saw on Sunday, more and more teams took a knee or linked arms during the playing of the National Anthem. Some teams, like the Steelers, stayed in the locker room while it played. For Thursday’s game the Packers plan to ask fans to join the team, and link arms with the person next to them in the arena during the National Anthem. Many of the players linked arms on Sunday before their game with the Bengals. Rodgers says that the peaceful gesture is meant to be an example of unity.

The game kicks off Thursday at 8:25 PM EST on CBS.