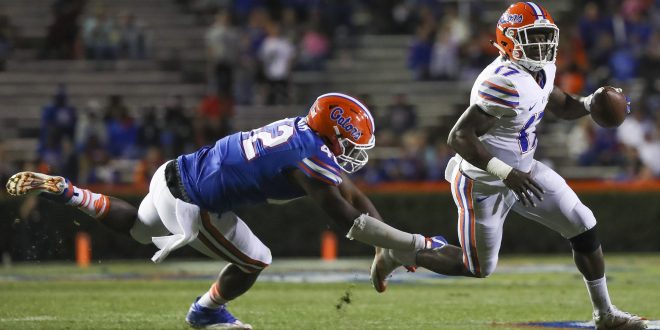 Smith is the only player mentioned in the complaint filed by the Gainesville Police Department.

A full description of the added charges can be found here.

Jordan Smith along with eight other Gator football players were accused of making fraudulent charges at the University of Florida’s bookstore by the University of Florida’s police department.  The other eight players named were Kadeem Telfort, Antonio Callaway, Keivonnis Davis, Ventrell Miller, James Houston IV, Rick Wells, and Richerd Desir-Jones.

Gator football coach Jim McElwain spoke Wednesday about this and he said there is still a long road ahead for many of these players.

McElwain added he is both disappointed and surprised by the scope of the charges filed against his players.

The most important thing the McElwain stressed was the ability to move forward and learn from what has happened.  This is not just a lesson for the players involved, but also the players not involved who have to deal with the media turmoil surrounding the team and their fellow teammates.

McElwain adds he is still in contact with the players and they are currently still attending classes.

Florida has its next football game this weekend with a home game against Vanderbilt.