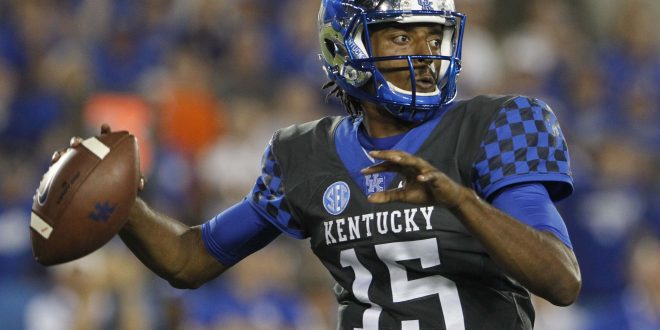 University of Kentucky Looks for a Win Over Eastern Michigan

The University of Kentucky Wildcats (3-1) are hosting the Eastern Michigan University Eagles (2-1) for their third home game this season. After both teams obtained their first loss last week, both the Wildcats and the Eagles are working towards bringing home a “W.”

The last three times Eastern Michigan, a Mid-American Conference team, met with an SEC team, the Eagles gave up no less than 44 points each game. According to The Lexington Herald Leader, EMU was once considered one of the worst programs in the Football Bowl Subdivision. Despite that, the Eagles already have a win over a power-five conference team. Eastern Michigan defeated Rutgers University 16-13 this season. The Eagles also have won 9 of their last 16 games under Coach Creighton.

The Wildcats are coming off a tough loss to Florida last Saturday. UK head coach Mark Stoops says his team is only looking forward.

On September 23rd, the Wildcats came close to ending their 30-game losing streak against the Florida Gators, but came up one point short. The two SEC teams met on the field last Saturday night in Lexington, KY. With the Cats up 27-14 in the fourth quarter, UK fans could almost taste a sweet victory over the Gators. Fans were ready to celebrate. It was later in the quarter when Florida’s quarterback Luke Del Rio sent a five-yard scoring pass to Freddie Swain, tying the teams 27-27. The Gators took the lead with only 43 seconds remaining when Eddie Pineiro nailed the extra point.

Kentucky managed to drive the ball into Florida territory with 3 seconds remaining. UK kicker Austin MacGinnis’ attempt came up short, ending the game. UK was upset by the Gators 28-27, giving the Cats their first loss of the season. It was Kentucky’s 31st consecutive loss to the Gators, extending the longest active losing streak against one opponent in college football.

Kentucky fans and former players took to Twitter. According to Kentucky.com, Kentucky was trending third in the country with more than 51,000 tweets.

How does Kentucky lose this game, on the same kind of mistake, twice? Left two guys wide open before snap/forgot they were on the field open

Sick over this @UKFootball loss. Just sick. Wish I didn’t care this much. #BBN

I have watched Kentucky give away FB games for 50 years and I've never seen them give one away worse than that one.

After the loss, Coach Stoops says Kentucky had one of their best practices on Tuesday.

Coach Stoops also says his team is ready to take on EMU on Saturday.

Eastern Michigan will travel to Kroger Field to play the Wildcats. The game is set for Saturday, Sept. 30 at 4 p.m. on SEC Network.

Kate Venezio is a fourth-year telecommunication-news student at the University of Florida. Kate does it all: Behind the camera she captures emotional moments as a photographer for the University of Florida Athletic Association. She's comfortable being in front of the camera, too. Kate interviews players, coaches, fans and family members for pre- and post-game coverage as a beat reporter for ESPN Gainesville/WRUF-FM. In addition, Kate produces the sports segment for the weekly WUFT News program. There, she's responsible for writing the script in its entirety to include production commands. The presentation includes video highlights and interviews taped and edited, and Kate then live anchors the final package on a daily deadline. In addition, she writes stories for wruf.com where she informs sports fans of local, state, and national trending topics. Kate also utilizes social media as a tool to help get the stories in front of viewers.
@@kate_venezio
Previous Suspended Gator Hospitalized After Scooter Accident
Next High School Football Preview: Oak Hall Faces St. Francis