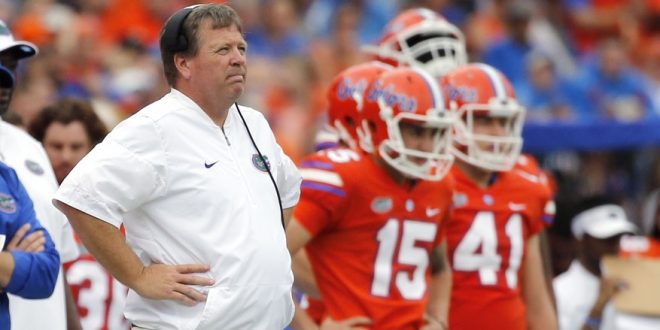 Starting wide receiver Tyrie Cleveland has been ruled out for the homecoming game against the LSU Tigers this upcoming Saturday. Head coach Jim McElwain said in his weekly press conference that Cleveland suffered a high ankle sprain in the fourth quarter of the Gators’ 38-24 win over the Vanderbilt Commodores.  Cleveland leads the team with 15 receptions and 326 yards. His most notable play for the Gators was against the Tennessee Volunteers with a game winning 63-yard catch in the end zone.

The Gators have been heavily reliant on their depth chart this season thus far. Key injuries and suspensions have plagued the team since before the season began. McElwain believes that after Cleveland’s injury he’ll need Josh Hammond and Freddie Swain to step up. The two don’t get targeted as much as Kadarius Toney and Brandon Powell, and  McElwain needs them to pick up the slack.

During the game, McElwain found out that starting quarter back Luke Del Rio broke his collar bone in Saturday’s game against Vanderbilt in the second quarter. Coach McElwain was forced to replace Del Rio with freshman Feleipe Franks. Del Rio had his first start of the season on Saturday and unfortunately it will be his only one.

Coach McElwain addressed the injury in his weekly press conference, mentioning that Del Rio was on his way to receive a metal plate for his injury. After an impressive game coming off the bench against Kentucky, Del Rio believed he had the will to keep the Gators SEC East title hopes alive. Now the only thing Del Rio needs is hope to continue through this painful injury.

"I wrote "Luke" under my left wristband at halftime. Our whole team is praying for him. Hopefully it's a speedy recovery." — @18franks pic.twitter.com/lPnm19dRhL

In a humorous addition, coach McElwain had no idea that two of his offensive players had received SEC honors this week when asked on the topic. Offensive Lineman Brett Heggie, a redshirt freshman who has started in all four games at left guard received Conference Offensive Lineman of the Week. Heggie has been a part of an offensive line that has seen improvement with each coming week.

The second player was Malik Davis. Davis was named SEC freshman of the week after rushing for a career-high 124 yards and two touchdowns. Davis sealed the game for the Gators after scoring the game winning touchdown on a 39 yard run at the end of the fourth quarter.

The defensive front line only allowed 46 rushing yards while Vanderbilt’s passing game lit up the Gators’ secondary. The secondary allowed 18 out of 40 completions for 264 yards through the air. McElwain addressed how Vanderbilt’s Offensive Coordinator Andy Ludwig kept Florida’s corners and linebackers on their toes the entire game.

Since losing to Michigan, the Gators are 3-0.  Florida faces the LSU Tigers for their homecoming game this Saturday. Florida ruined LSU’s chances of achieving the SEC West title last season in Baton Rouge, LA.

LSU is still recovering from their loss to the Troy University Trojans, a non-conference and unranked opponent, ending their 49-game winning streak against non-conference opponents.

Recent grad from the University of Florida. Editing all articles on here while helping out the newbies. Love all things basketball.
@@MarcoJMartinez_
Previous Gators Soccer take down Georgia
Next FSU Takes Down Wake Forest for First Win of the Season