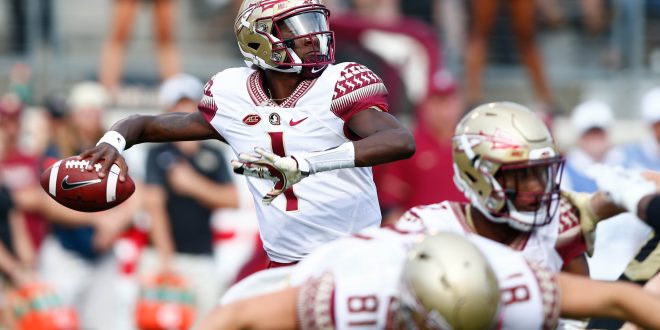 FSU Takes Down Wake Forest for First Win of the Season

Florida State earned their first win of the 2017 season. The Seminoles beat Wake Forest 26-19 on Saturday afternoon. While it was not the prettiest of games, Florida State came back in a rather dramatic fourth quarter to take the win.

The Seminoles got off to a 0-2 start for the first time since 1989. The season-opener loss against Alabama proved costly, as the team lost starting quarterback Deondre Francois. Francois left the game with a season-ending patellar tendon injury.

FSU then took on NC State in their second game. Freshman quarterback James Blackman led the team, but the offensive line still struggled. The defense looked sloppy as well. The Seminoles fell to NC State by a score of 27-21.

While the season has been off to a rough start, Florida State fans had some reason to smile this past weekend. FSU overcame undefeated Wake Forest, though it wasn’t pretty. The Seminoles were down by 3 points with four minutes left in the fourth quarter. Ricky Aguayo kicked a field goal to tie the game. Aguayo, who was named the ACC Specialist of the Week, went 4/4 in this game, including kicking a career-long 51 yarder. Blackman secured the win in the final minute with a 40-yard touchdown pass to Auden Tate.

Head coach Jimbo Fisher says he is glad the team is finally in the win column.

Fisher also described the FSU locker room after the win, saying never to take for granted how special and hard winning is.

Auden Tate and Cam Akers are two key players to watch on this Florida State offense. The Seminoles will need them to step up for this weekend’s game against Miami, which could be their biggest game of the season.

Up Next: Rivalry Game Against Miami

This weekend’s game will be a big test for this Florida State team. The Seminoles will face off against the University of Miami on Saturday. The Hurricanes are undefeated, holding a 3-0 record. There has been no shortage of offense for Miami, as they have scored a minimum of 31 points in each of their games. Quarterback Malik Rosier is dual-threat and while this is his first season starting, this redshirt junior looks anything but new. FSU’s defense could be the deciding factor in this game.

Saturday’s kickoff at Doak Campbell is set for 3:30.

Born and raised at the ballpark! Typically quiet- until it comes to sports. I'm a South Florida native with a passion for baseball nearly as strong as my faith. Grew up in garnet + gold, turned out sporting orange + blue. Likely to be found with a camera. And yes, I take food pictures.
@victoriarossman
Previous Press Conference: McElwain Rules Luke Del Rio Out for season, Tyrie Cleveland Out for LSU Game
Next NFL Preview: The Undefeated Chiefs Host the 2-1 Redskins