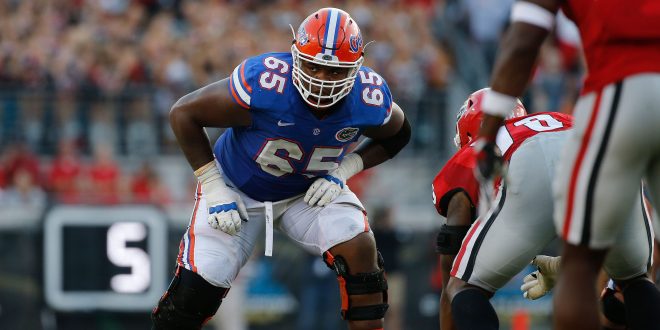 Last week against Vanderbilt, Jawaan Taylor and the Florida offensive line, as well as the whole offense, turned in one of its best performances of the season. The Gators racked up 223 on the ground, and put up 38 points on the scoreboard.

That’s a big improvement from just four weeks ago.

In Florida’s season-opening loss to Michigan, the Gators only managed 11 yards on the ground and zero offensive points.

A big reason for the improvement is a renewed dedication to the run game. Freshman Malik Davis has broken out in that area, putting together the best game of his young career against Vanderbilt. Davis carried 17 times for 124 yards and two touchdowns, highlighting both his big play ability and his strength when running between the tackles.

Davis and the rest of the running backs have been aided by improved offensive line play over the past few weeks.

Especially dominant has been the left side of the offensive line, left tackle Martez Ivey and left guard Brett Heggie. Heggie earned SEC honors as the lineman of the week for his performance against Vanderbilt.

“He’s really just a smart kid,” Taylor said of his fellow lineman. “He knows the game of football, and he’s very dominant, and he has a good work ethic.”

Franks Back in at QB

The improved play up front will make life easier for redshirt-freshman Feleipe Franks, who is taking over the starting quarterback spot again after Luke Del Rio’s season ending collarbone injury. Franks came in and played well in relief against Vanderbilt, and showed off his arm strength with another deep completion to Tyrie Cleveland.

Taylor agreed that the Gators were able to attack the deep parts of the field with Franks against Vanderbilt.

“I thought we did Saturday, yeah, we stretched the field pretty good,” Taylor said.

“I feel like he’s [Franks] going to even better and better each week as the days go by. The way he practices and the hard work he puts in, he’s just going to keep growing.”

Up next for Taylor and the Gators is one of the most anticipated matchups of the season. LSU visits Gainesville as the Gators homecoming opponent in a meeting where there’s no love lost between the two teams. Florida fans will fondly remember that the Gators visited Baton Rouge last season after the Hurricane Matthew situation, and won on a goal line stop to clinch the SEC East.

But Taylor said that’s in the rear view mirror.

“It was fun to celebrate, but we’re on to a new year, with two new teams, so we just have to prepare and be ready,” Taylor said.

Native New Englander. Follow me on Twitter: @jonacosta_10
@jonacosta_10
Previous Tiger Woods Mulling Retirement
Next With Cleveland Out, Is Hammond the Next Man Up?