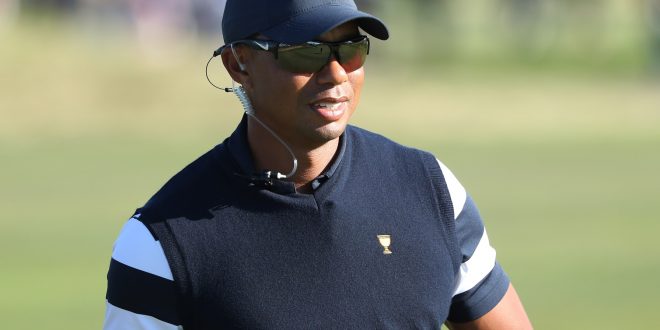 Tiger Woods graced golf fans last weekend with a United States win at the 2017 President’s Cup. Only he wasn’t playing this time, he was coaching. Woods is still recovering from his back surgery earlier this year in April.

On Sunday, he admitted that he is attempting to get back into golf shape. He has also recently begun practicing at his Jupiter home. Again, he reminded fans that his return is “a process.” His April surgery is now his fourth time going under the knife since 2014. At this point, he is rehabbing his swing, but admitted that he is currently only attempting to hit 60 yard shots. While Tiger admits to the possibility of a return to the tour, he hasn’t completely ruled out retirement either.

This is the first time that Woods has told the press of any retirement plans. The biggest star the sport of golf has ever seen might have already shot his last round. Woods’ battle with off the course issues have made headlines for years now, and they seemingly came just as his game fell off. Its been a lackluster ending to an amazing career that began with a Masters victory when he was only 21 years old. He set the record tournament score for Augusta and beat the runner up, Tom Kite, by 12 shots. Wood’s, of course, also became the first non-white player to win the Masters.

America’s President’s Cup team of 5 shows how much has changed in golf after almost a decade without a Tiger Woods’ major victory. The United States’ team now features golf’s new young stars and is showing a lot of promise heading into the Ryder Cup in Paris, less than one year away. ”

We have a dynamic here that is different than I’ve seen, and that is, these young guys are not only great players, fiercely competitive, but they have a quality that’s taken me decades to acquire, and that is that they are genuinely happy for each other’s success,” Phil Mickelson said. “That type of support amongst each other, even though they are competing against each other, brings a really special energy and dynamic to this team.” The camaraderie that the US is feeling after the Presidents Cup win should translate into the future.