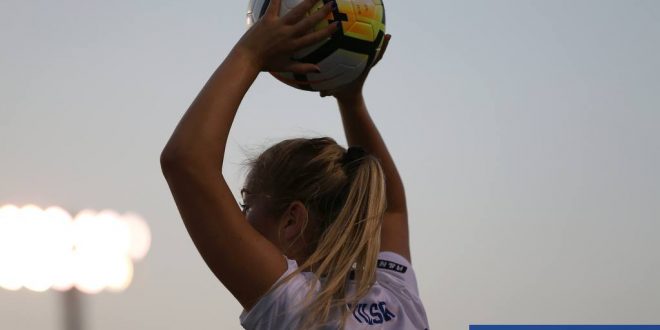 The ninth ranked Florida soccer team beats Missouri 2-1 Thursday night at home and it was also the 400th victory in program’s history.

The Gators had a dominant performance during the entire game. In the first half, the Gators applied a quick recovery of the ball every time the Tigers tried advance in transition. The Gators constantly had clean build-ups thanks to the brilliant short-passing game of Kristen Cardano and Parker Roberts.

Gabby Seiler‘s positional freedom was crucial for the Gators to confuse rival defenders on every offensive transition. This positional switching helped the Gators to score the first goal of the game. In the 12th minute, Seiler went from the right wing (her starting position) to the left wing; once she received the ball, she made the cut to the box, found the passing angle and assisted Roberts who only had to tap it in.

Florida coach Becky Burleigh praised Seiler because of her solid performance in tonight’s victory for the Gators.

Less than one minute after Roberts’ goal, the Gators got their second. Mayra Pelayo made a cross from the right wing that ended up getting inside the net thanks to a missed read by the Tiger goalkeeper Kristen Rivers. Both Roberts and Pelayo scored their third goals of the season respectively.

Roberts was The Compass for Florida

The first half was a one-sided one in favor of the Gators. Florida outshot Missouri 13 shots to one. Roberts ended up bringing the balance both offensively and defensively for the Gators. She constantly took advantage of the passing lanes generated by the players in front of her.

In the second half, the Tigers improved in a certain way at taking advantage of the empty spaces by the Gator fullbacks on the exteriors. But it was not enough for them to generate clear chances. The Tigers needed a set piece to come close in the score. In the 56th minute of the game, Madison Lewis made a fantastic free-kick to the right corner of the Gator net.  But the Gators hung on for the win.

The next game for the Gators will be on Sunday at Vanderbilt.

Journalism student at the University of Florida. Venezuelan and future sports journalist.
@joseso2793
Previous Chris Chiozza Hopes to be More Than a Buzzer-beater
Next Preview: Gators Look to Defend Home Turf Against LSU