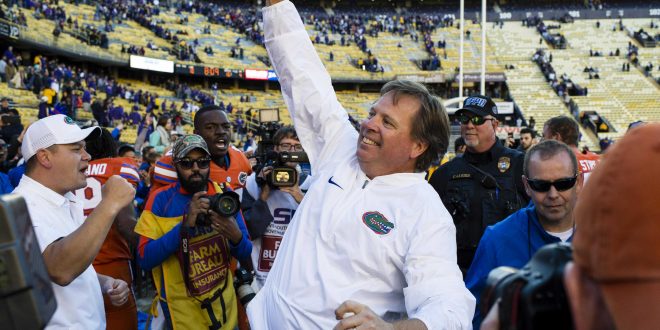 Gainesville, Fla. — The rivalry. Homecoming. Both teams with a lot to prove on their season.

There couldn’t be any more hype around this year’s 2017 Florida-LSU matchup, and it’s arguably this game could be one of the biggest deciding factors for how the rest of the season goes for each team. Last year’s Hurricane Matthew situation added, even more, fuel to the fire.

There is definitely have revenge brewing after LSU lost to Florida at home in 2016 on a last-minute goal-line stand. As they look to earn back bragging rights during UF’s homecoming. SEC Network host and sideline reporter Laura Rutledge said some Gator players aren’t sure that’s the best thing.

“They felt like that served as a ton of motivation for LSU…because you don’t want an LSU team even though they’re coming off a loss to Troy there’s still a ton of talent on that team,” Rutledge said.

Who Is LSU This Season?

The LSU Tigers will come into the game 3-2 on the season. They don’t have a ton of momentum, they’ve lost two of their last three games, the first fall to Mississippi State on the road 37-7 and then a major upset last weekend on their own homecoming to Troy. The Trojans ran the ball all over LSU, putting up 206 yards on the ground and winning 24-21.

From the outside looking in, it seems like there’s been turmoil. There have been player-only and coach-only meetings in the past week and all players stepped away from social media leading up to the game.

All Focus. No Noise. ✈️ pic.twitter.com/Tpc3HgZJqO

“Anybody can be a mess until they’re not a mess anymore.”

That’s how Rutledge described the LSU football team so far this season but also the capacity to turn things around.

Their defense sure knows how to put pressure on the quarterback, ranking second in the SEC and 14th in the nation in sacks. Arden Key leads that troupe – he’s just one sack away from breaking into the program’s top 10 ranking for career sacks.

On offense, Danny Etling is in control of the ball at quarterback and has recorded 48-of-85 passes (56 percent) so far on the season. The run game is their strong point, especially in Derrius Guice, who has been nursing an ankle injury.

What Florida Needs to Do Well to Win

With quarterback Luke Del Rio out for the season, all eyes are on Feleipe Franks. So far, Franks is just under 64 percent of his passes for 557 yards and three touchdowns and one interception. If the Gators don’t have wide receiver Tyrie Cleveland for Franks to connect with, that will definitely be a sore spot. Cleveland has 15 catches for 326 yards and two touchdowns, the best on the team.

Legendary Florida quarterback Tim Tebow returned to campus for the SEC Nation and weighed in on the quarterback situation.

“I think Feliepe has shown he can handle some moments. I think he’s improving and I think he’s getting used to everything. You’ve gotta remember, he’s kind of still a freshman,” Tebow said. “I think something that Luke did was bring a lot of confidence and maturity but I think that is something that will come with Feleipe.”

The run game has been where the Gators have found recent success and could be a major key to finding it again LSU. Florida’s last three games have been 150 plus yard games. Last weekend against Vandy, recording 216 yards. Malik Davis has stepped up in a major way, leading the team in rushing with Lamical Perine right behind

Previous No. 9 Florida Gator Soccer Reaches 400 Victory Mark In Win Over Mizzou
Next Not So Sweet Homecoming: Florida Falls to LSU 17-16