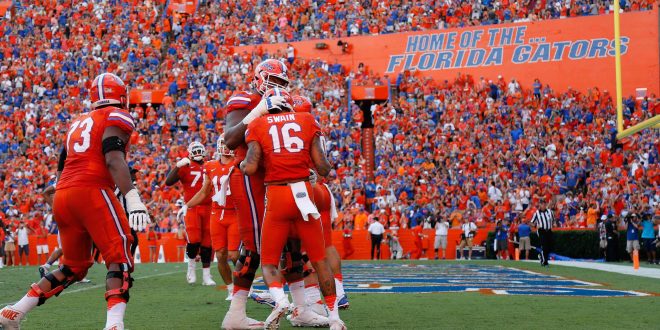 After a devastating loss to LSU, Florida is looking for redemption going into week 6 against Texas A&M. The Gators are 3-1 in the SEC and 3-2 overall. If they are able to pull off a win against the Aggies and an upset against Georgia the Gators might find their way to a third straight SEC East Title.

Fans and players are remaining positive on the team’s future and hope to see a change in the team’s tempo. Sophomore wide receiver Freddie Swain agrees and believes that his team has more to prove.

Swain suffered a shoulder injury in the 2016 surgery, appeared in all 13 games and underwent surgery in the offseason. With a torn labrum in his right shoulder Swain sat out during the 2017 Spring game to continue his recovery. Back at the wide receiver position, Swain has totaled 60 yards and a touchdown including an impressive one-handed catch against Vanderbilt. Swain has also landed himself a spot in the starting lineup.

With numerous Gators injured and a handful out on suspension, the team is hoping for a change in pace. Swain comments on the team’s progress and believes that the team needs to better their communication to allow for more plays to be called.

The Gators are in need of a win to keep the hopes of an SEC title alive. If the Gators can improve on their pass rush and keep up momentum through the fourth quarter they may stand a chance. Looking past the Aggies, the Gators still have to go through Georgia and South Carolina, and after UAB, Florida State. The schedule is not in favor of the Gators but they are used to expecting the unexpected. Although their hope may be wavered going into week 6, Florida has shown time and time again that they can get the job done.