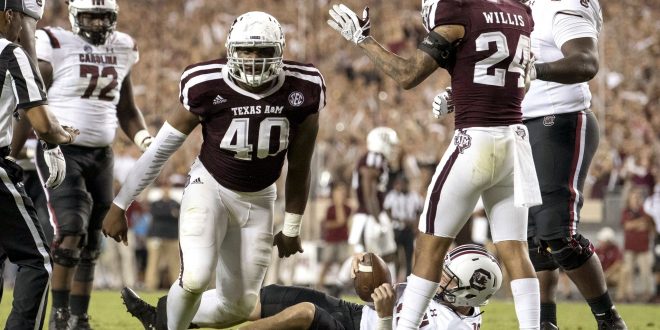 Texas A&M’s game against Florida on Saturday carries a lot of importance for the Aggie coaching staff and team. This is the first time since 1962 that the Aggies are coming to The Swamp to play Florida. This game will be a turning point in the season for whatever team wins.

Why This Game is Important for Texas A&M?

The past three seasons, Texas A&M lost to Alabama and after that game, the team could not recover.  This year, Texas A&M held its own against Bama, only allowing the Tide to score 27 points. Freshman Quarterback Kellen Mond leads the Aggie offense and threw for over 230 yards against Alabama’s defense.

This game is important for the coaching staff as well.  Kevin Sumlin’s job is at stake this season and the Aggie’s must have a winning season in order for him to stay on as head coach.

Sumlin knows this game is going to be tough for his team, especially with it being in the Swamp.

"It's going to take a really, really fine effort to go there and win…but our guys will be ready to play." –@Coachsumlin #12thMan pic.twitter.com/kMbleeWXJo

“How will Texas A & M play this week after a strong showing last Saturday?” is a question running through a lot of Aggie fans’ minds.

Florida’s defense is usually one of the best in the nation. However, this year, the Gator’s defense is struggling to live up to its name. The Aggies can use this down year for Florida as a chance to show off their talent.

Quarterback Kellen Mond continues to get better every game. He’s scored seven touchdowns and has thrown for 1,045 yards. He’s also ran for 266 yards, the third most for the team. He hasn’t had an issue connecting with his receivers, but he’ll have to watch his passes against the Gator defense.

C.J. Henderson is the Gator’s biggest threat with pick-sixes. He was the first Florida defender to get pick-sixes in back-to-back games since 1965.

Aggie running backs Treyveon Williams and Keith Ford have a combined total of 743 rushing yards and have scored 12 touchdowns so far this season. As long as the offensive line can hold back Florida’s defensive line, the Aggies will have an easy time moving down the field and picking up first downs.

On average, the Tide score 43 points per game and the Aggies defense allowed three touchdowns and two field goals in their last game. The only other team to keep Alabama’s score in the 20s was Florida State before the loss of QB Deondre Francois.

If Texas A&M can keep this strong defensive momentum, they will stop Florida’s already struggling offense from scoring a lot of points on Saturday’s game.

The Aggie defense, on average, allows over 380 yards to opposing offenses each game. If they can hold to Gators to under this amount of yards, the Aggies should win the game.

.@CoachSumlin talks about the program's first trip to Florida since 1962 #12thMan pic.twitter.com/GiE0ZeHHoB

The winner of this game will turn their season around and show fans and the SEC they are stronger and better. Texas A&M won’t go down without a fight, especially since they want to prove they can finish the season strong after playing Alabama. Coach Sumlin wants this win to help make a better case for him to keep his job as head coach.

Nicolette is a senior at the University of Florida who has participated and enjoys reporting on all things related to sports.
Previous Gator Football: McElwain Provides Injury Updates
Next Gator Baseball Prepares for Fall Ball