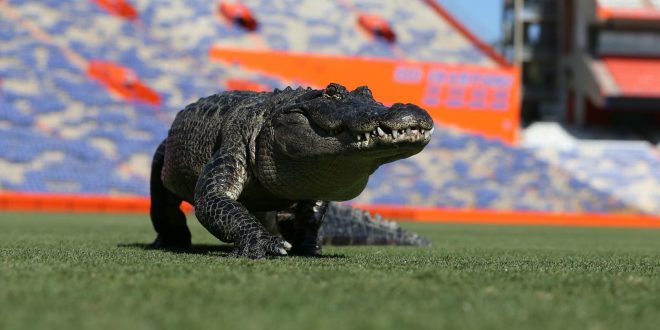 Meet the Gator that Broke the Internet

The Florida Gators matchup against Texas A&M is creating a lot of buzz. Maybe it’s because this is the first time since 1962 the Gators host the Aggies, or maybe it’s the new Gator inspired uniforms, or maybe it’s the real Gator walking around the football field with defensive back Nick Washington.

Florida Gator football hype videos featured an alligator this whole week. Many Gator fans were wondering where this Gator came from. Well… 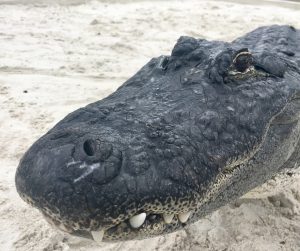 Pumba is an 8-foot long,150-pound gator from Gatorland Wildlife Park in Orlando, Florida. Pumba is 11 years old and is one of the wrestling show Gators in Gatorland. He is very used to being around people so he is comfortable getting his picture taken. As you can see he has a very nice smile but it didn’t use to be that way. When he was younger, his teeth curled up in the front. That is actually how he got his name Pumba, after the famous warthog in the Disney’s movie The Lion King. Pumba has curled up teeth just like our famous alligator. Thankfully his teeth no longer curl up but his name is still perfect since a lot of visitors travel to Gatorland because it is so close to Walt Disney World. 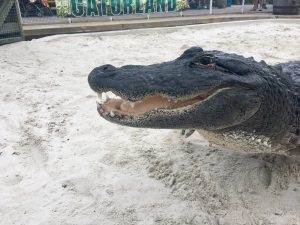 Gator Vision, the video production team for all Florida Gator Athletics, has used Gatorland’s alligators on many occasions for hype videos, but this hype video was very unique. Instead of the video team driving to Orlando to tape the alligators, Pumba’s team of handlers and trainers drove up to Gainesville to get the perfect shots of Pumba walking across the field. The video production team felt very safe with Pumba and his trainers that they were allowed to take many cool video shots and pictures.

For the actual photoshoot, Gator Vision closed down the stadium for a couple of hours. That way it wouldn’t ruin the surprise and also for the safety of the video team and the alligator.

Gatorland was very excited to showcase Pumba to the loyal Florida Gator fans. It was just a fun way to showcase one of their star alligators in a fun setting and Pumba really enjoyed it. Right when he got back to Orlando, the trainers blessed him with many treats so it was a job well done. 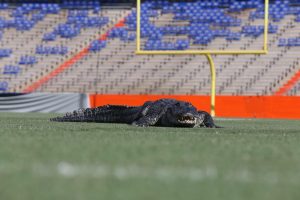 Hello my name is Kaitlin Alexander, a passionate story teller and lover of sports. Fun facts about me: I am a world traveler, interviewed all three UF Heisman Trophy winners, and a former intern of Bleacher Report. Follow me on Twitter: KalexanderUF
@KalexanderUF
Previous Arkansas Looking for First SEC Win in Tuscaloosa
Next UF Volleyball: Alhassan Lifts Gators to Three-Set Sweep