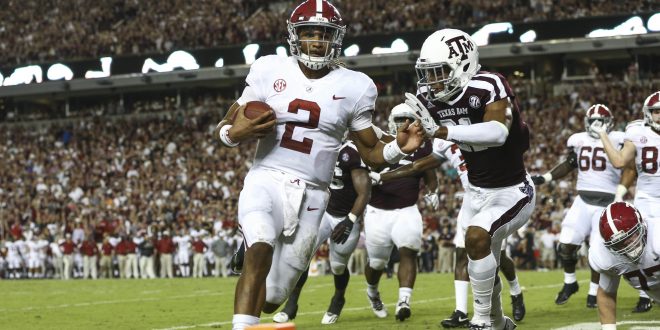 Arkansas is searching for their first SEC win, but Tuscaloosa may not be the best place to get it. Alabama has only lost one home game since 2013 and four since 2008.

Jalen Hurts has been the reason why Alabama’s offense has been so lethal. He has been incredibly efficient, completing 63 percent of his passes for seven passing touchdowns. He is the only starting quarterback in the SEC to have not yet thrown an interception.

On top of that, he has been very dangerous running the ball. He is third in the SEC in rushing, with 517 rushing yards. His 7.49 yards per carry is second in the conference, only trailing the man he hands the ball off to, Damien Harris.

Arkansas struggled to run the ball last week against South Carolina, totaling 106 yards on 32 attempts. They will have a tough challenge against the Alabama front seven. Alabama has the number one rush defense in the country, allowing only 73.3 rushing yards per game.

Arkansas’ quarterback, whoever it will be, must take advantages of plays in Alabama’s half of the field and not turn the ball over. Alabama has been exceptional in pass coverage with nine interceptions.

Austin Allen should be the guy at quarterback after suffering a shoulder injury last weekend. If he is not healthy, redshirt freshman Cole Kelley will play. Kelley got his first extended action against South Carolina and had his ups and downs. He completed eight of his thirteen passes for 140 yards, a touchdown and an interception.