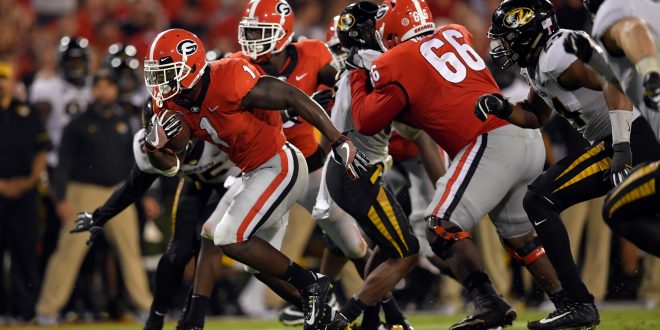 It has been an incredible season for the undefeated Georgia Bulldogs. They have not only been beating, but destroying teams this year. They are currently ranked 3rd in the nation and have a record of  7-0 and 4-0 in SEC play. This week the Dawgs get a break from playing and prepare for one of their biggest games of the season down in Jacksonville, FL where they will play rival, the Florida Gators.

In last week’s match up against the Missouri Tigers, surprisingly the Dawgs kept it a close game in the first half. Going into halftime, the game was 21-34. This was thanks to how Missouri’s strong receivers played. However, the Bulldogs managed to rally in the second to beat up on the tigers 53-28.

The Dawgs also managed to get 696 yards, which is the second most in school history. They had 326 receiving and 370 yards rushing. Running back Sony Michel went 9 for 86 rushing yards with two touchdowns. Jake Fromm, also had a great game going 18 for 326 and 2 touchdowns and earning himself SEC Freshman Player of the Week.

To start the season, it was thought that Jacob Eason was the man for the Dawgs at Quarterback, after having a good 2016 freshman season. However, during the third drive of the season against Appalachian St. Eason went down with sprained knee ligament, halting his football season. True freshman, Jake Fromm then had to come in and start. Fromm has defiantly gotten the job done considering the team is out-scouring opponents 37.6 to 12.6. However, now Eason is healthy and competing for his spot back. But is it too late for Eason to win-back his starting position? Head Coach Kirby Smart, said in an interview that they’re going to go with whats best for the team.

With Georgia now in their bye-week, they have plenty of time to figure things out. Playing Fromm seems to be the safe bet, but playing Eason could give them an Edge against the Gators, because there isn’t as much film on the Sophomore QB.

The SEC game the Bulldogs always have circled on their calendars, is coming up soon. This year the Dawgs are an 82.2% favorite against the Florida Gators according to ESPN’s Football Power Index. However, considering that since 1990 Florida has won 26 of the 32 games, this should still be a tough one for the Dawgs.

While during the joint bye-week the Bulldogs are trying to figure out which QB to play; Florida is trying to heal from their long list of injuries. There is an upside for the Gators, because reportedly five of the injured Gators could be back for the game out in Jacksonville; defensive end Jabari Zuniga (ankle), defensive back Chauncey Gardner (ankle), offensive lineman Martez Ivey (knee) and wide Receiver’s Kaderius Toney (shoulder) and Tyrie Cleveland (ankle).

While Georgia has played four SEC Teams so far (Mississppi St., Tennessee, Vanderbilt and Missouri), Florida’s defense is whats really going to test the Bulldogs with whichever young QB they play. Even though the Dawg’s have proven to be a high scoring team all season.

After the game out in Jacksonville, Georgia’s two schedule concerns will be against Auburn and Georgia Tech. Auburn is currently 5-2 and will host the Bulldogs on October 11th, Georgia Tech on November 25th  however, is 3-2 , but with the option offense it’s always difficult to play the Yellow Jackets.

On October 28th, kickoff for the Florida vs Georgia Game is set for 3:30 P.M. on CBS and will be played in Jacksonville, FL at Everbank Field.