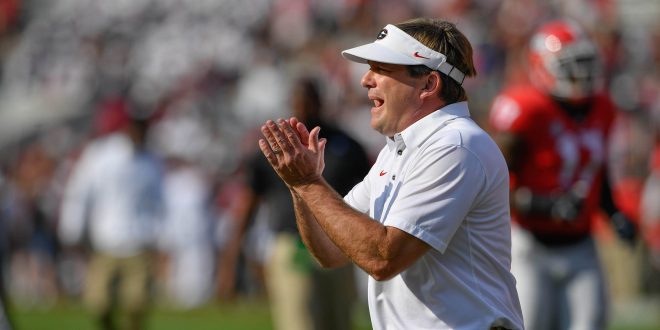 sThe College Football Playoff Rankings were released Tuesday night with no change in the top four. For the second week in a row, the Georgia Bulldogs remain top dog in the College Football Playoff Rankings. The rest of top four includes the Alabama Crimson Tide ranked second, the Notre Dame Fighting Irish ranked third, and the Clemson Tigers ranked fourth.

The SEC has five teams ranked in the selection committee’s Top 25. The SEC currently hold the top two spots in the rankings with SEC East Division Champion Georgia ranked first and SEC West Division leader Alabama ranked second. The Auburn Tigers cracked the top 10 this week as they are ranked tenth following the team’s 42-27 win over Texas A&M. Mississippi State stayed at number sixteen in the rankings after a tight 34-23 win over UMass. As expected, LSU fell from nineteen to twenty four following another loss to rival Alabama.

Last week was an earth shattering week in the Big Ten that hurt the conference’s chances at making the playoff. Two of the favorites to be the conference representative in the playoff, Penn State and Ohio State, each suffered losses that severely hurt their playoff aspirations. Ranked sixth last week, Ohio State suffered an embarrassing 55-24 road loss to Iowa. The loss caused the Buckeyes to fall from sixth in the rankings to thirteenth. The same can be said for Penn State. After losing a heart breaker to Michigan State 27-24 on a last second field goal, the Nittany Lions fell from seventh to fourteenth in the rankings.

The top two teams in this weeks rankings, Georgia and Alabama, have been dominant this season. Both appear to be on a collision course to meet in the SEC Championship in Atlanta as the top two teams in the country. This week, both teams have matchups that could derail that train. Top-ranked Georgia has been on easy street the last few weeks, playing the lesser opponents in the SEC. The Bulldogs face one of the conference’s better teams Saturday in tenth ranked Auburn on the road. Alabama is coming off another win over rival LSU. The Crimson Tide hopes to get another impressive win as they travel to Starkville to face sixteenth ranked Mississippi State.

Although both teams are undefeated, the Wisconsin Badgers and Miami Hurricanes haven’t received a ton of national love. If it wasn’t for Northwestern being ranked at twenty-five this week, the eighth ranked Badgers wouldn’t have beaten any ranked teams. They could get their second ranked win as they face Iowa, who’s coming off their major upset over Ohio State. The seventh ranked Miami Hurricanes struggled all season to put teams away late. Last week, the Canes got their first signature, convincing win at home over then thirteenth ranked Virginia Tech 28-10. The Hurricanes will be tested as an old rival pays them a visit this weekend, third ranked Notre Dame.

After Saturday’s games, the College Football landscape could look vastly different as the season hits the home stretch.

After missing the last four games with a knee injury, Gators cornerback Kaiir Elam is …