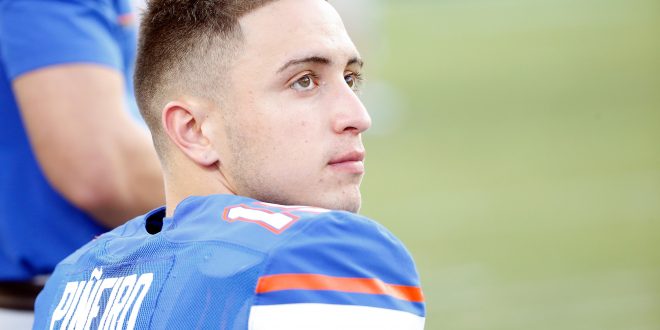 An exciting first few home games turned into a disappointing season for the Florida Gator football team. Following the loss of Head Coach Jim McElwain and another disappointing defeat at Mizzou, the Gators are gearing up for Saturday’s matchup against South Carolina. Junior Kicker Eddy Piñeiro says the Gators are now working to get the win this weekend and to “go out on a good note with a bang and win a bowl game”; however, Piñeiro may have a bigger goal in mind for himself.

Eddy Piñeiro’s career with the Gators

Piñeiro impressed Gator fans right away in 2016, kicking several field goals of 40 or more yards. His first season, he made 21 of 25 field goal attempts for an 84.0 percentage. Piñeiro was recognized as SEC Special Teams Player of the Week for three successful field goals against LSU in 2016. In addition he earned ESPN All-Bowl Team honors among several other acknowledgements. This spring, he impressed fans and coaches with an 81-yard field goal during practice. Since day one with the Gators, Piñeiro has been a crucial member of the team.

This season, Piñeiro has missed only one extra point attempt against LSU. It was also the only extra point he missed in his whole college career. Many believe this is what lost the Gators the game against LSU and kicked off Florida’s losing streak. Piñeiro says he takes full responsibility for that missed attempt; however he believes he “bounced back well” and isn’t letting it hold him back.

In high school, Piñeiro was a star soccer player at Miami Sunset Senior High School appearing in just seven football games in four years. In college, he originally pursued soccer at ASA Community College. Former Gator Head Coach Jim McElwain recruited Piñeiro on a football scholarship for the 2016 season. Piñeiro was close with McElwain and was disappointed to see him go.

Piñeiro has his sights set on something bigger

Piñeiro is now draft eligible for the NFL and says that is the ultimate goal. He says he plays football with his family in mind and hopes to support them trough a career in the NFL commenting,

“To get my family out of the struggle, that’s what it’s all about. I left soccer, the sport that I loved, to give my parents a better life through football.”

The NFL was always the goal, but his loyalty is first to McElwain who gave him this opportunity. Now that McElwain is no longer with the Gators, Piñeiro says it may be easier to move on from from the NCAA and accomplish that goal in the NFL.

For now, Piñeiro focuses on earning success for Florida

Piñeiro intends to finish out 2017 strong with the Gators. He says he took a different approach against Mizzou that didn’t work as well as he had hoped, so he won’t do the same thing in South Carolina.

I grew up in the Washington, DC area and now I'm a Gator. I'll always be learning more about myself, others and the world around me. And I'll always be talking about sports.
@kelsey_godman
Previous College Football Playoff Rankings Released Before Big Weekend for Top Teams
Next Arkansas-LSU Preview: Bielema vs. Orgeron