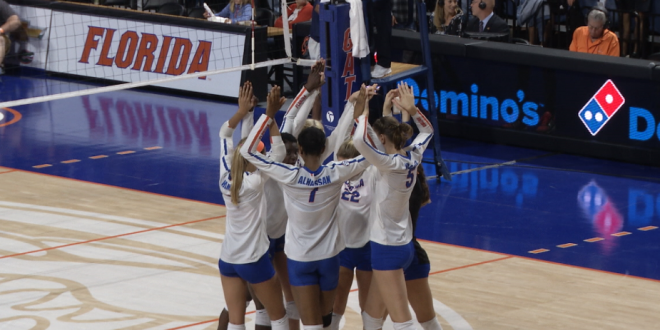 The last time the Gators and Razorbacks faced each other in volleyball it was a tough battle until the end.

Friday night’s game was very similar as the (17-9,7-7 SEC) Razorbacks took the (21-1, 13-1 SEC) Gators to four sets. Florida made the proper adjustments leading to a three sets to one victory. Carli Snyder led the team in scoring with 24 points.

Arkansas came out on fire and won the first set 25 to 23.  With her team down a set, Snyder had five kills and three digs in the second set. Allie Monserez was a big contributor in that set as she suppressed the Razorback attack with seven digs.

The third set was much easier for Florida as they defeated Arkansas 25 to 13. The Gators kept going back to what was working for them in the second set. Snyder led the team with 6.5 points and Caroline ‘CK’ Knop led the charge defensively with a team-high six digs.

Florida went on to dominate in the fourth and final set, winning 25 to 7.

The Gators made a statement with their defense once again on Friday night as they out blocked the Razorbacks 18 to 6.5. Rhamat Alhassan led the teams in blocks as she had a total of five.

Whether it was with her impressive aces or her diving saves, Snyder absolutely dominated on Friday night. The senior had one of her best all around matches as he had 13 digs to go with her 24 points.

The Gators wrap up another SEC weekend at home on Sunday against the Missouri Tigers. It is a special day for players like Carli Snyder and Rhamat Alhassan as it is Senior day. Florida will certainly need their seniors to step up as the Tigers are in the midst of an impressive season. On Wednesday, Missouri defeated South Carolina.

First serve is set to happen at 1 p.m. from the Exactech Arena. You can listen to the match on ESPN 98.1 FM & 850 AM WRUF and it will also be televised on the SEC Network.

#GatorsWWWWWWWin! Got a much-needed wake-up call in that first set, but all that matters is the W #WeChomp pic.twitter.com/otC8gGVJbC