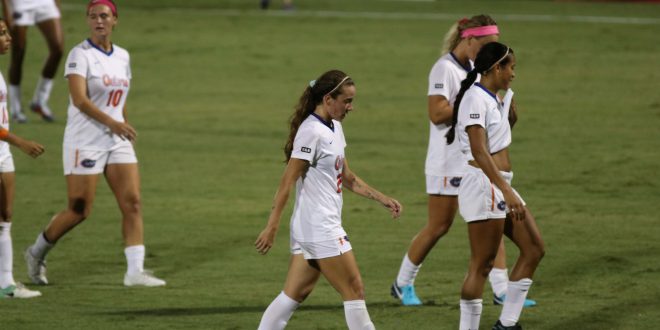 The Florida Gator soccer team beat the University of South Florida 1-0 in the second round of the NCAA Tournament on Friday in Gainesville. This was the first meeting against USF since 2014 (2-0 UF win) and the 13th time that Gator soccer makes it to the round of 16 in 21 NCAA Tournament appearances.

The first-half of the match was exciting because of the physicality and desire to press the ball consistently. Although the Gators dominated the ball, the first 10 minutes on the pitch were a dead even battle. Both Florida and USF were exchanging possession of the ball until eventually, a chance arose in the 10th minute at the end of the penalty box that was arguably a foul on Florida, but the Bulls missed out on a penalty shot. Almost immediately after, Florida midfielder Sammie Betters’ shot is saved off the line by the Bulls defense. To make matters crazier, USF clears a shot off the line again a minute later. More chances for Florida opened up, but a hand ball led to a disallowed goal from Betters.

All in all, the referee was lenient in the first 45 minutes, with no players receiving a booking. However, slide tackles were scraping the grass frequently in the first half, proving the willingness for both teams to win the ball back and push their team upfield.

In the second half, the Gators maintained more possession of the ball forcing USF to park the bus. Bulls midfielder Andrea Hauksdottir was the biggest threat to Florida in creating chances but was quickly marked and intercepted. Florida defender Rachelle Smith and the rest of the backline were effective in stopping USF forward Evelyne Viens. Smith says that communication is a huge factor in maintaining a solid defense.

The Bulls frustratingly were forced to clear the ball when in possession. Luckily, Florida did not bury any of their other eight shots on goal. Deanne Rose was phenomenal in her first game back after returning from international duty with the Canadian national team.

The Florida Gators will remain at home to face the Washington State Cougars in the third round of the NCAA Tournament. The Cougars won against Tennessee via a 3-1 advantage in penalty kicks.  This is the first time in history that the Cougars make it to the third round. The Cougars originally upset the University of Central Florida in the first round, therefore, the Gators are the only team left from Florida in this part of the bracket. The Gators have outscored their past two opponents 4-1 in back to back wins.