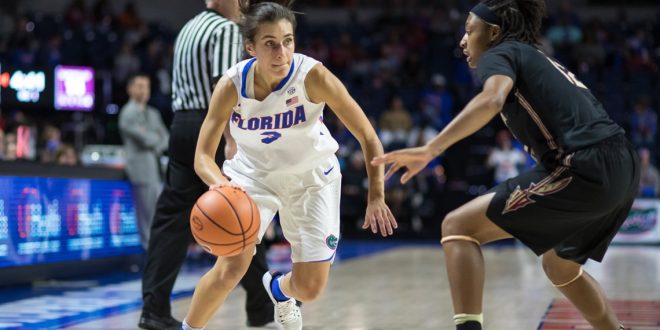 Bree Maxwell recaps a tough loss for the Gator women’s basketball team against their bitter rivals and looks ahead to how the Gators can improve moving forward.

For the Gator women’s basketball team, Friday night was a night where nothing could go right. After coming out of the gates stronger than the previous two games, the Gators got steamrolled by the rival Florida State Seminoles. The 17th ranked Seminoles pulled away in the second quarter and didn’t look back. The Gators suffered the worst home loss in the series with Friday night’s 84-54 thrashing.

The Gators were able to make some believers the way they started the game. The Gators were tied with the Seminoles at the end of the first quarter, 18-18. Then, the Gators couldn’t get anything accomplished on the offensive end. In the second quarter, the Gators went 3 of 17 (17.6%) from the field. The Seminoles took advantage of the Gator struggles and ended the quarter on a 12-2 run to take a 12 point lead heading into the half. Gator head coach Cam Newbauer describes what went wrong in the second quarter. In the second half, it was all Florida State. It appeared as if the Gators were shooting on a rigged carnival hoop. The Gators went 21 for 65 (32.3%) from the field and 7 of 28 (25%) from beyond the arc. To better this shooting percentage, Newbauer wants his team to bring more attention to shot selection in practice.

The boards haven’t been friendly for the Gators so far this season. Rebounding has been a constant struggle for this team. The struggle came to ahead Friday night as the Seminoles torched the Gators in the rebounding department. Against Florida State, the Gators were out rebounded 50-32. The Gators finished the game with only nine offensive rebounds, which doesn’t bode well when shooting as poorly as they did. Senior forward Hayley Lorenzen describes why the Gators struggled Friday night getting rebounds.and coach Newbauer says that rebounding can fixed through things they can control.

After losing by the largest deficit to your bitter rival, there aren’t too many positives to take out a game like that. The Gators, however, are focusing on the areas that went right for them tonight. One area that saw noticeable improvement was the few amount of turnovers. In Tuesday’s loss to Arkansas State, the Gators turned the ball over 23 times. One can argue that this proved costly for the Gators. On Friday, fans could see the team turn a new leaf by the team only giving up the ball six times. The flashes that the Gators showed early on were promising and junior guard Funda Nakkasoglu views that as a positive takeaway.  In a blowout situation, it’s easy for a team to throw in the towel. The Gators didn’t do that Friday night. Coach Newbauer is proud the way the team didn’t stop competing.

There is no denying that the Gators have work to do in multiple areas. The team will try and fix these issues as they head to Savannah, Georgia to take part in the Savannah Invitational next week. The Gators open up play in Savannah with a match up with the Richmond Spiders on Tuesday.

Previous Bradford defeats Dunnellon 24-14, moves on in Class 4A playoffs
Next Gators Soccer Advances In NCAA Tournament After 1-0 Win Over USF