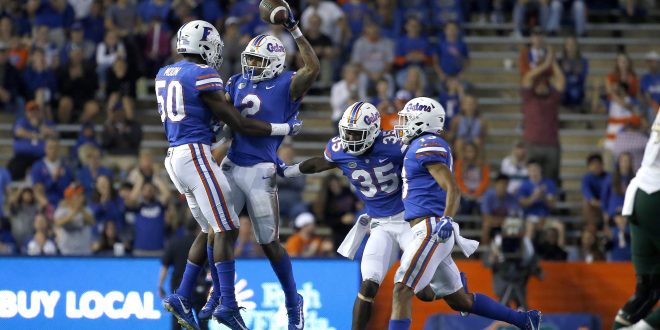 It’s been a month and a half since the Gators had last picked up a win.

Following a 38-24 win at home over Vanderbilt on September 30, Florida proceeded to 0-5 over the following seven calendar weeks.

That disappointing period, which included with the firing of its head coach, was marked by an ineptitude on offense, a lack of turnovers and aggression on defense, and a special teams that couldn’t provide a big boost to a team that needed one.

That script was flipped Saturday in the Gators’ 36-7 over UAB, as the offense, defense, and special teams all came together to give Florida a win it really needed.

“It was awesome to get a win at home,” Florida interim head coach Randy Shannon said. “That’s the most important part of this, to come back off of the road for a month and come back and get a home-game win.”

“I think it was well deserved. [The Florida players] work their tails off week to week and it was a really good confidence booster for us to come out here and show what we’ve been working on. I think it’s really good for these guys.”

Offensively, the Gators were balanced. Franks was accurate and avoided any costly turnovers, while the running game did most of the heavy lifting.

The Gators rushed for 257 yards, running all over the Blazers defensive line. The ground game has been the one constant positive for Florida’s offense, but this was their best game, totaling a season-high. A big spark was the play of freshman running back Adarius Lemons, who ran for 89 yards on 11 carries, and would have been well over 100 yards had two big carries not been called back because of holding calls.

“It’s awesome to see Adarius (Lemons) kind of let loose. He had that one really big run that was negated by a penalty but it shows how hard they’re working in practice and how high-motor of a kid he is.”

On the opposite side of the ball, the defense was swarming. Despite losing the shutout in the fourth quarter, the seven points are the fewest they’ve allowed all season.  They held the 27th ranked rushing attack to a season-low three rush yards and caused a season-high four turnovers.

“It was big. Believe it or not, every week we work on turnovers,” Shannon said. “More than any other place I’ve ever been. Just trying to create turnovers, stripping the ball. They came for us tonight.”

Even the special teams stood out, especially Eddy Pineiro, as he made all five field goal attempts and became the first kicker in school history to make two field goals of 50+ yards in one game.

So for the Gators, it’s not just the win, but how they did it, and the circumstances they’ve dealt with this season that makes this win, one to relish.

“Right now, I just want to throw a shout-out to Coach Rumph and Coach Shannon,” defensive lineman Taven Bryan said. “Without those dudes, this thing was the Titanic, man. I be real, those guys have been patching it up.”

Florida will hope it keeps floating next week, as they take on archrival Florida State, a team they haven’t beat in four years. Coming off a win like this though, there’s a good energy around the team that provides a cause for optimism.

“To come out and get a win, it feels really good for our confidence, especially going into next week where we have a big game against Florida State,” Franks said.

And if the Gators can pull off the win…

“That’s going to be like icing on the cake, send these guys outright,” Franks said. “It’ll be a fun time, to have a bunch of fans out and we’ll definitely prepare. The coaching staff will get us ready and we’ll be ready to play.”