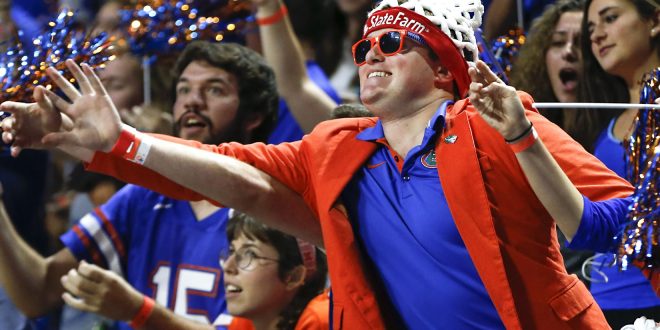 It wasn’t pretty, it wasn’t fun to watch, but it was just enough. The Florida Gators narrowly defeated the New Hampshire Wildcats, 70-63, in their tightest game of the season. After back-to-back 40-point wins in which the Gators twice eclipsed the century mark in scoring, Florida struggled to knock down shots vs. New Hampshire, shooting 32% from the field and an even worse 17% from beyond the arc.

Jalen Hudson’s second-half performance saved the day, as he scored 22 points in the final twenty minutes. Hudson finished the contest with 26 points and 7 rebounds. Tanner Leissner led the way for New Hampshire, as he has so many times in the past, scoring 23 points on 9-23 shooting.

Florida’s bench outscored New Hampshire’s, 31-9. Besides Hudson, only Egor Koulechov (14) and Chris Chiozza (12) finished in double-digit scoring for UF. Egor Koulechov added a team-high 10 rebounds, but only made one of six three-point attempts. The Gators’ shooting struggles led to the team finishing with only 3 assists, their lowest total of the season.

Mike White compared Tanner Leissner to Yante Maten. He also said that he told his team at halftime that New Hampshire was simply tougher than they were.

Mike White said it seemed like his team played 80% of the game on defense. Said that his team needs to be more selective in their transition offense. #Gators

Mike White on Jalen Hudson’s biggest improvement since he got to UF from Virginia Tech:

Mike White on New Hampshire controlling the pace for most of the game:

Mike White on what was said at halftime of the game:

Jalen Hudson on New Hampshire’s performance and style of play:

Jalen Hudson on his second half takeover:

For the first time this season, the Gators trailed at the first media timeout. New Hampshire held a 7-6 lead with 15:37 remaining in the first half. Florida had three turnovers in the first four minutes of the game.

The Gators still trailed by one point with 10:53 left in the first frame. Florida made only 5 of their first 14 shots to open the contest.

With 3:55 left in the first half, Jalen Hudson had the Gators’ lone assist. New Hampshire’s slow-tempo game threw Florida’s offense off early. Still, UF led 25-20 at the final media timeout of the first twenty minutes.

The Wildcats ended the first half on 12-4 run, tying the game at 32 headed into halftime. Tanner Leissner led all scorers with 14 points, while Egor Koulechov led the Gators with 12 points.

Keith Stone (+6), Chris Chiozza (+5) and Michael Okauru (+2) were the only plus players for the Gators in the first half. Florida averaged .914 points per possession in the first frame and went four for eight on lay-up attempts.

Florida opened up the second half on a 5-0 run following a Chris Chiozza mid-range jumper and three-pointer. The Gators led 37-32 with 18:42 remaining in the game.

Florida’s shooting woes continued into the final twenty minutes. The Gators made just 2 of their first 13 three-point attempts and shot 28.6% from the field in the first eight and a half minutes of the second half. UF led UNH, 44-40, with 11:35 remaining in the game.

New Hampshire continued to keep themselves in the game at the under-8 minute media timeout. The Wildcats trailed by four with 7:33 remaining in the contest, shooting 8-19 from beyond the arc at that point in the contest.

The Gators will have 3 days off before heading to Portland, Oregon for the PK80 Tournament. Florida starts off with Stanford on Thanksgiving day at 10 p.m. in the first of three total tournament games.

Check out the highlights from tonight's 70-63 win vs. New Hampshire. #OneTeam pic.twitter.com/Ex9y87jrHO