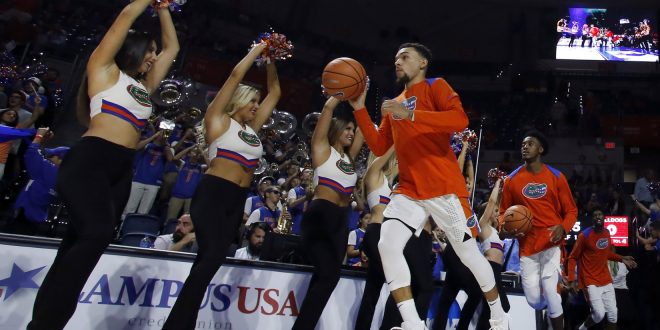 The grind of the Gators’ non-conference schedule is in full swing as Florida prepares for their third game in just seven days. Today at 6 p.m., UF takes on the New Hampshire Wildcats of the America East Conference.

New Hampshire is 1-1 on the season with a 56-point win over Wheelock College, a Division 3 school with just 811 undergraduate students, and a 28-point loss to the Texas Longhorns. Florida is currently 2-0 on the season with an average margin of victory of 41 points per game. Sunday evening’s match-up is considered a campus game in the lead up to the PK80 Tournament in Portland, Oregon during Thanksgiving weekend.

Objectively, there are only two Wildcat players the Gators need to stop to secure a comfortable victory over New Hampshire. One of them is 6’7″, 230-pound forward Tanner Leissner. Leissner is a senior at UNH and has averaged over 29 minutes per game in each of his four years at New Hampshire. He finished with 14 points, 6 rebounds and 1 block against Texas, but only shot 3-13 from the field. If the Gators can force double-teams upon Leissner and pressure him into passing the rock, they’ll be on to a good start.

The second player to watch for on UNH is fellow senior Jacoby Armstrong. Coincidentally, Armstrong is also 6’7″ and 230 pounds. He has shot a solid 46.3% from the field during his career at New Hampshire and went 3-5 from the beyond the arc en route to 11 points vs. Texas in the team’s most recent contest. The way to stop Armstrong is to force him off the three-point line and take away his long-range jumper.

The Gators have squared off against the Wildcats three times in program history. Florida and New Hampshire played a three-game series between 1999 and 2001, with UF taking all three games. The Gators won each of the games by at least 48 points.

Previous Florida Football: Defense Overwhelms UAB In Gator Win
Next Gators Finally Able to Celebrate a Win as All Three Phases Come Together