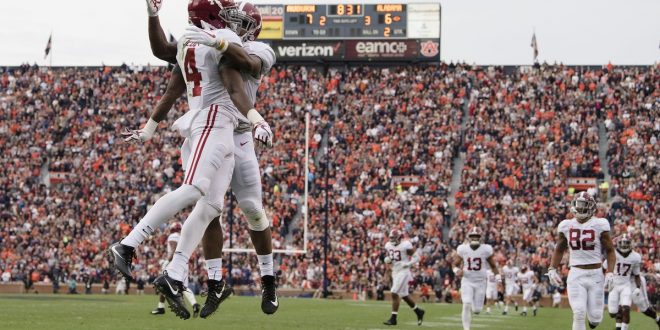 Auburn fans rushed onto the field to celebrate their win against No.1 Alabama in rivalry week, the undefeated Crimson Tide lost to Auburn in the Iron Bowl 26-14.

Alabama is now at 11-1 after taking a loss to Auburn at the Iron Bowl. Entering Saturday’s matchup Alabama was the top dog. But in the last three weeks Auburn has come out on top of the undefeated teams.

The Tigers hadn’t defeated the Crimson Tide since 2013.

Quarterback Jarrett Stidham, who played his freshman season at Baylor and then spent last fall taking classes at a Texas junior college and not playing football, was stellar in his Iron Bowl debut. “It’s been nuts. I watched this game on a couch at [last year] on a couch at my girlfriend’s house in Houston, Texas,” Stidham said. “Turn around a year later and here I am talking to you guys after winning the Iron Bowl.”

Alabama safety Minkah Fitzpatrick said Stidham running the ball was good and that his footwork took them by surprise.

His development this season is one key reason Auburn finally beat Alabama. Stidham completed 21 of 28 passes for 237 yards in Saturday’s game.

“When it’s a big game like this, every yard matters,” he said. “Sometimes, you have to take the hit and move on.”

Auburn’s first touchdown came with running back Kerryon Johnson taking a direct snap, faking a handoff, taking a couple of steps forward and leaping to throw a bunny to the sophomore Nate Craig-Myers. In the fourth quarter, Stidham threw a 25-yard completion off a pitch from Johnson, who had again taken a direct snap.

The only knoticeable tough moment for Stidham on Saturday was his fumble at the end of the first quarter where he mishandled the snap and failed to recover the loose football, turning it over in the red zone, costing points. But he clearly moved on from it, something his teammates say makes him a great leader.

WHERE THE CRIMSON TIDE WENT WRONG

Jalen Hurts, Alabama’s sophomore quarterback, was constantly attacked by rushers. He completed 13 of 23 passes for 177 yards with one touchdown and added 80 yards on 17 rushes, leaving him to have almost as much as their three key running backs had.

The Crimson Tide left the game with one non-offensive touchdown.

Auburn pushed to 78 total offensive snaps to Alabama’s 61. Time of possession was a 36-to-24 with Auburn having the advantage.

UP NEXT FOR THE TIGERS

Auburn will now face Georgia, a team they already beat by 23 once with the SEC title and a spot in the College Football playoff on the line.

The Tigers now are now have their sights set on one of the four playoff spots. Although the team took two losses this season coach Gus Malzahn made it clear the team deserves a shot (one of the losses was to defending national champion Clemson, who were ranked 3 at the time). As for Alabama, their head coach Nick Saban said his team still deserves a playoff shot after playing for the national title the past two years.

“I don’t think one game defines who you are,” Saban said. “It certainly doesn’t define this team for who they are. I’m sorry that I could not do a better job as a coach and as a leader.”

On Saturday, Kerryon Johnson carried @AuburnFootball over No. 1 Alabama with his 8️⃣th 100-yard performance of the season. #WarEagle pic.twitter.com/hnDmhoNFSl

Previous Dolphins Blown Out of the Water, Lose 35-17 v. Patriots
Next Jaguars Fall to Cardinals in Final Minutes