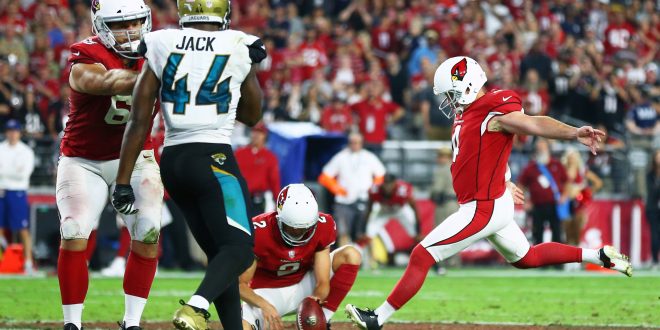 The Jacksonville Jaguars four-game win streak was snapped  in the final seconds of Sunday’s game against the Arizona Cardinals. A 57-yard field goal led Arizona to a win, beating Jacksonville by a score of 27-24.

Jacksonville’s offense struggled throughout Sunday’s game. The Jaguars were ranked the NFL’s no. 1 rushing team entering the game, averaging 160 yards per game. However, they had just 91 against Arizona, their lowest on the season.

With just over three minutes left in the fourth quarter, both teams had interceptions. However, neither team was able to capitalize on the opportunity and score. The Jaguars had the ball in the final minute with the game tied at 24-24. Instead of letting the clock run out, the Cardinals got the ball on a punt with 0:16 left in the game. A 57-yard field goal from Phil Dawson with seconds left won the game for Arizona. The kick was Dawson’s career-longest.

Marrone Blames Himself for Loss

The Jaguars are now 7-4 on the season. They will play the Indianapolis Colts next Sunday, starting the first of three games in a row at home.

Born and raised at the ballpark! Typically quiet- until it comes to sports. I'm a South Florida native with a passion for baseball nearly as strong as my faith. Grew up in garnet + gold, turned out sporting orange + blue. Likely to be found with a camera. And yes, I take food pictures.
@victoriarossman
Previous Auburn becomes the Iron Bowl champs defeating No. 1 Alabama
Next Ravens Face Texans in Monday Night Showdown