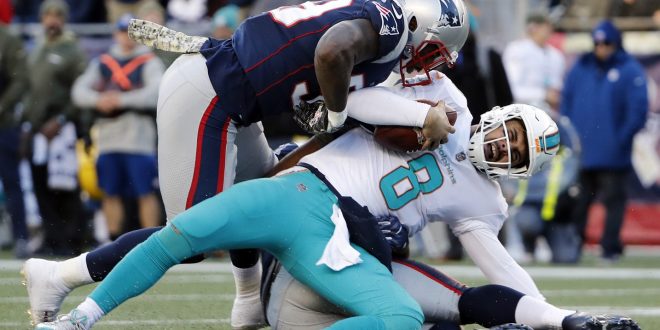 Dolphins Blown Out of the Water, Lose 35-17 v. Patriots

The Miami Dolphins were embarrassed this past Sunday after losing to their AFC East division rivals the New England Patriots 35-17 for the third time in a row.

The visiting Dolphins came into Foxborough standing at 4-6 on a four game losing streak. Quarterback Matt Moore was assigned to his third start of the year after Jay Cutler suffered a concussion in the previous week against the Buccaneers.

The Dolphins knew they had a tough game in their hands. Realizing that their season was on the line and knowing that their last win at Gillette Stadium was back in 2008. On top of that, the Patriots were also on a quiet six game winning streak, and weren’t looking to slow down any time soon.

To start off, the first two possessions for the Patriots had them up 14-0 with 5:33 left in the first quarter. Touchdowns thrown by Tom Brady to both Rex Burkhead and Rob Grownkowski.

Furthermore, the Pats also surprised many by running a fake punt on a fourth and nine, mocking the Dolphins special teams and converting. The Dolphins failed to score in the first quarter while the patriots had their comfortable lead.

The second quarter began with the Dolphins having possession and ending with a punt, pushing the Patriots back inside their own 20 yard line. A couple plays later and Brady muffed the ball and ended with Dolphins Safety Rashad Jones recovering the fumble and scoring, 14-7.

Afterwards, the Patriots began at their own 22 yard line and Brady ultimately kept his composure after the unforced error he had and moved the ball 78 yards to score another touchdown to Rex Burkhead, his second final touchdown of the day, 21-7.

Even more so, the Dolphins continued their Dolphin-esque offense and only amounted a field goal inside the red zone for the rest of the half, 21-10. But, the Dolphins defense did get an interception in the closing minutes of the half by Bobby McCain.

The Dolphins had great field position overall, but got intercepted by the hands of Stephen Gilmore. Moore was trying to find Devante Parker in the end zone after what seemed like a great drive. Patriots did nothing with the ball on offense which concluded the half.

In addition, the Patriots dominated the entire third quarter. Scoring one touchdown by Gronkowski, his second of the day, and not allowing the Dolphins get on the scoring board at all, 28-10.

To say the least, the Dolphins had three possessions in the third, two of them resulting in punts and one in a turnover fumble by Matt Moore.

The fourth quarter began with the Dolphins on a quick rally. The Patriots gave up the ball on a turnover on downs in the first play of the quarter after the Dolphins defense stopped them on the Dolphins 28 yard line. Afterwards, Matt Moore drove the ball on 8 plays for 72 yards and found Kenyan Drake in the end zone for an 8 yard touchdown, 28-17.

An interesting game was a brewing. Dolphins surprisingly only down 11 and handing the Patriots their second punt of the game. They had a possibility of a comeback in their hands with half of the fourth quarter left.

The Pats D-line pounded the Dolphins and got two sacks on first and second down. Jarvis Landry dropped the ball on their fourth down attempt. Brady was inside the Dolphins territory which ultimately ended with the Pats getting in the end zone, 35-17.

No one scored again. The Dolphins punted and gave up an interception in the final moments of the game, leaving Moore with three turnovers on the day.

A record 17 seasons in the making. pic.twitter.com/jDZOOZQPc5

To conclude, this game summed up the entire season for the Dolphins. Just when you think there’s a chance, you’re proven wrong.

The season is over in South Florida. Last in the AFC East tied with the New York Jets, the Dolphins leave Foxborough with five straight losses.

The Dolphins will host the Denver Broncos this Sunday @ 1:00 EST.

Recent grad from the University of Florida. Editing all articles on here while helping out the newbies. Love all things basketball.
@@MarcoJMartinez_
Previous College coaching carousel keeps turning
Next Auburn becomes the Iron Bowl champs defeating No. 1 Alabama