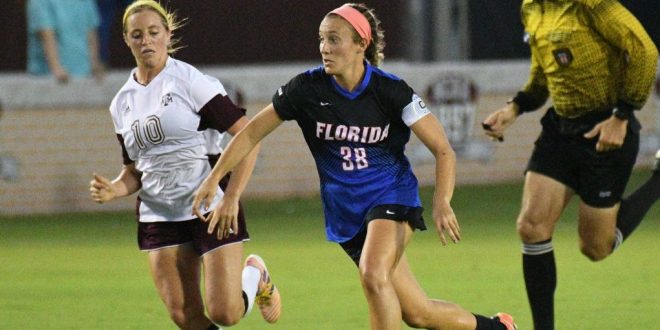 The Florida Gator women’s basketball team has been in desperate need of depth this season. After the loss of Sydney Morang for the season, the Gators picked up walk-on freshman forward Stephanie Brower. On Thursday, the Gators picked up another walk-on and the name will be very familiar to fans of Gator soccer. Gator soccer star Gabby Seiler will play guard on the hardwood for the Gators for the remainder of the season.

How about THIS! @GatorsSoccer All-American @gabby_seiler –
"Basketball is my first love so just getting to be in this environment, joining a new team and getting to experience that is something I’m really excited about.”https://t.co/1q4vMp7lNL pic.twitter.com/cNuo7oSdU2

Seiler was a star on both the pitch and the court when she was in high school. When she attended McIntosh High School in Georgia, she set the all-time scoring record for both boy’s and girl’s basketball bypassing the 2,000 point mark. The previous record holder was Jeff Sheppard, who would go on to win two national championships with the Kentucky Wildcats. When it came time to decide which sport to play in college, she decided to go with soccer over basketball. Now, as she returns to the court, Seiler says that basketball is, “my first love so just getting to be in this environment, joining a new team and getting to experience that is something I’m really excited about.”

Seiler joining the women’s basketball team became possible thanks to Gator soccer head coach Becky Burleigh. According to Seiler, Burleigh reached out to Gator women’s basketball head coach Cam Newbauer, expressing Gabby’s potential interest in joining the team. With the Gators desperately needing help in backcourt depth, Newbauer reached out to Seiler and the two began to discuss Seiler joining the team. Coach Newbauer is excited to have Seiler a part of the team. He believes she can really help the culture of the team because he says she’s “a great athlete, a champion and an incredible competitor.”

Seiler hasn’t played basketball, competitively, since she was in high school. There will be a transition period for her to get adjusted to playing basketball again. Seiler was on the bench in uniform Thursday night for the Gators SEC home opening loss to Alabama. When she’s ready to play, Seiler could alleviate some of the minutes for the starting backcourt. The soccer star hopes her enthusiasm can, “bring positivity and energy to the team.”