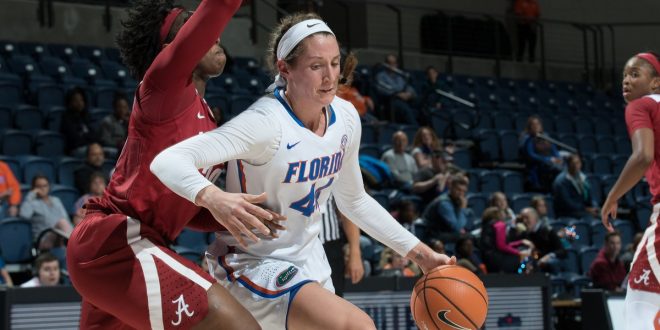 The Florida Gators failed to finish another SEC game strong as they fall to Alabama 63-54 Thursday night. Alabama ended the game on an 11-0 run in the final five minutes to seal the victory. The loss saw more of the same for the Gators.

Throughout this season, the Gators have experienced major troubles in finishing games on a high note. However, it appeared as if that trend was going to change in the third quarter against Alabama. The Gators trailed the Tide by ten points with approximately six and half minutes left in the quarter. Florida embarked on a 10-1 run to pull within one. Then, Alabama turned their one-point lead to a 48-42 lead to end the quarter.

A pair of free throws from senior forward Haley Lorenzen put the Gators ahead 56-54 with 5:21 remaining in the fourth quarter. Then, the wheels fell off for the Gator offense. Alabama went on an 11-0 run in the games final five minutes, which proved to be the difference. The Tide’s run was aided by Florida missing its final nine shots. After the game, Gators head coach Cam Newbauer called the end to the game “frustrating” because, “we had some bad shots at the end of the game where we had a chance to tie the game or take the lead, but it was kind of the same old, same old.”

More of the Same

Thursday was a game that shifted away from the formulaic way that this team has operated this season. The Gators had their seventh double-digit three-point shooting performance of the season. Success from beyond the arc has usually led to a Gator victory. Thursday night was not one of those games. More of the same problems overshadowed the three-point barrage. Florida was dominated by Alabama on the glass. The Tide outrebounded Florida 44-35, which included 17 offensive rebounds. The Gators continue to be careless with the basketball, turning the ball over 17 times turning into 14 points for the Tide. Alabama’s bench play overpowered Florida’s reserves. Alabama had 20 points come from its bench while Florida only had two bench points.

The country, including Gainesville, has been ravaged by historically cold weather the last few days. The cold reached its way into Exactech Arena Thursday evening when discussing the Gator offense. In the first quarter, Florida went 4-15 (26.7%) from the field to start the game. The slow start could also be felt by two key starters. Lorenzen and junior guard Funda Nakkasoglu struggled offensively throughout the game. Lorenzen led the team with 14 points, with 12 of those points coming in the fourth quarter. The same can be said for Nakkasoglu, who scored all of her 11 points in the final fourteen and a half minutes.