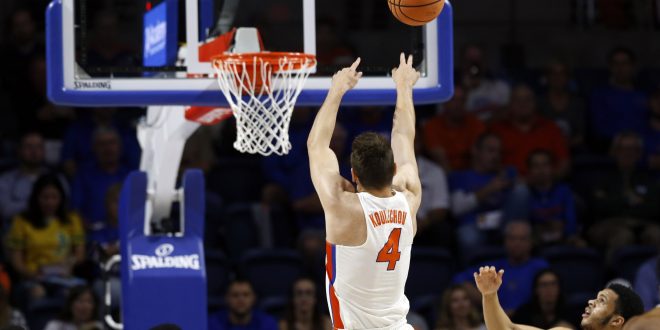 Koulechov Is On The Rise in Gainesville

When Florida Gator basketball fans found out they were getting a graduate transfer who could shoot the lights out, the first thought that came to mind was Canyon Barry. Barry was a graduate transfer from the College of Charleston the previous year. He won Gator fans over with his scoring prowess and underhand foul shooting. It was fair for Gator fans to expect similar production out of Koulechov, but no one expected more.

However, these Barry-like expectations didn’t last long. In his first game in a Gator uniform, Koulechov exploded for a career-high 34 points, 5 rebounds, and 5 assists. He has now posted double digit scoring in 12 of the Gators’ 16 games. He is averaging 15.5 points per game on the season, including 19.8 points in conference play.

The former Rice and Arizona State product scored the first 13 points for the Gators against Mississippi State on Wednesday night. He finished the night with 23 points (9-13 from the field, 4-5 from three) and 8 rebounds to lead Florida to a 71 – 54 victory over the Bulldogs.

Egor Koulechov is a basketball assassin. The man can hit from anywhere. #Gators

Koulechov is a top-notch shooter. The Russia native is shooting 41.5% from beyond the arc, which ranks 70th in the country. The average college three-point percentage is 35.0%, so Koulechov is clearly in the upper echelon of long-range shooters in the nation.

He is also shooting 93.9% (46-49) from the foul line. Barry set the Florida record last season with 42 straight free throws made, but Koulechov has not failed to live up to the expectations of his predecessor.

On top of his elite scoring ability, Koulechov has a very well-rounded game. At 6’5”, he leads the team in rebounding (6.8 rebounds per game). He is also one of the team’s best defenders. Head coach Mike White has been vocal about how he is arguably the team’s best post defender, even with many stronger and taller players on the roster.

In Florida’s press conference after the Mississippi State game, Mike White discussed some of the valuable aspects that Koulechov brings to the team.

On top of what White mentioned, Koulechov is a solid passer, rarely turns the ball over, and has a very high basketball IQ. Even when his shots aren’t falling (which isn’t often) he never fails to make an impact on the court. When his shots are falling, his impact is monumental.

Egor Koulechov is appointment television. A gifted shooter, but also can score from all three areas. Was huge in Florida's win over Mississippi State.

Previous Egor Koulechov Excels In Florida’s 71-54 Win vs. Mississippi State
Next Heat Work as a Unit to Top Pacers