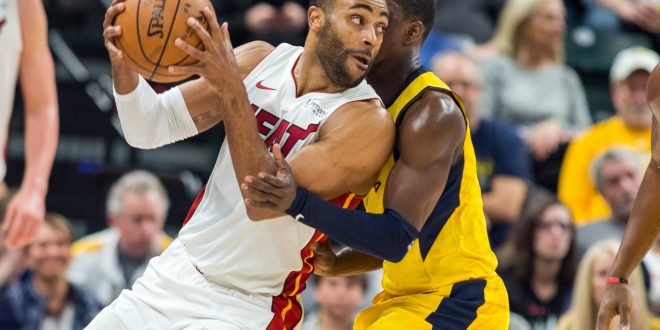 Heat Work as a Unit to Top Pacers

After spotty play earlier this season, the Miami Heat seems to be finding its niche. The Heat beat the Indiana Pacers on the road Wednesday night, 114-106. Miami’s record now sits at a respectable 24-17, sliding the team into fourth place in the Eastern Conference.

While many of the Heat’s earlier wins came behind massive efforts from Hassan Whiteside, the rest of the team has stepped up. Last night, Miami worked as an 8-man unit, with 7 players scoring in double figures.

Whiteside maintained most of Miami’s ball control, rebounding fifteen times. But, he is becoming less selfish each game, solidifying his status as the leader of the Miami Heat.

Goran Dragic topped the Heat’s scoreboard, going for 20 points during the game. Dragic did contribute in other ways, though. He was responsible for nine assists, flirting with a double-double.

Going from a few-man show to a whole circus seems to have done the team some good.

Last year, the Miami Heat spent their fourteenth pick on Kentucky freshman Bam Adebayo. This season, Adebayo got off to an okay start, averaging 6.7 points and 5.1 rebounds.

Against the Pacers though, Bam enjoyed his second straight glory game. The rookie came off the bench and played for 31 minutes, scoring 15 points. His game also looked more complete, notching 5 rebounds and 2 assists in Indiana.

Coach Erik Spoelstra is looking for ways for Adebayo to play more.

The Heat have big men all over the place, but it looks like there is room for one more.

At the halfway point, the Miami Heat is still figuring things out. The team is trying to get to the post-season after narrowly missing it last season. But, this season’s guess-and-check method is coming along nicely. And as long as they can find ways to make plays, Miami just might make it.