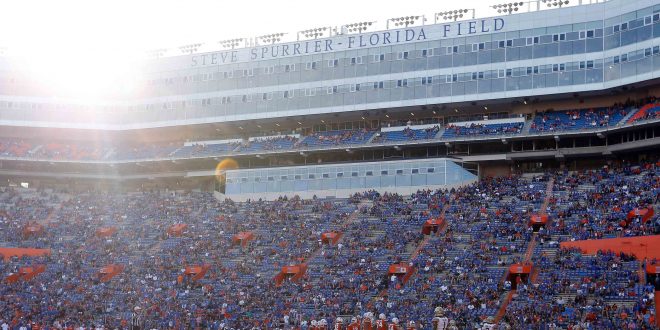 Gators Football Recruit Russell and Other Players Done with Florida

After joining the Florida Gators as a top recruit, defensive back Randy Russell is dealing with tragic news. During a pre-participation physical, doctors would find an abnormality in his cardiac workup.

Russell Out of Football

In a Twitter post, Russell would open up about the condition keeping him out of playing at UF.

The condition he has is hypertrophic cardiomyopathy. The disease is when the heart muscle becomes abnormally thick, making it harder to pump blood from the heart. According to the Mayo Clinic, this disease has many side effects. The main effect, however, is an issue in the electrical system of the heart. The issue can lead to “life-threatening abnormal heart rhythms.”

Gotta feel bad for Randy Russell, who #Gators assistant coach Ja'Juan Seider praised on December signing day: "He's a leader. You talk about a kid who is loyal, who kind of helped this class stay together."

Russell is seen as one of the state’s top recruits. Coming out of Miami Carol City Senior High School, he is the 28th-ranked safety recruit in the country, according to 24/7 Sports Composite. Standing at 5’10” and 180 pounds, Russell is not the first player to have his career end due to a heart condition.

After missing the 2017 season because of an abnormality in the heart, James Robinson is also out of football. Much like Russell, he would come in as a top recruit for the Gators, before getting word that he would no longer play football.

With Russell out of football, this isn’t the only news to come out of Florida. Defensive lineman Jordan Smith, who is linked to the credit card scandal of last season, also revealed his future. Citing the coaching changes at Florida and his “recent actions”, he would take to Twitter to announce that he will be transferring from Florida.

Smith, however, is not the only player leaving. According to multiple reports, freshman offensive lineman Kadeem Telfort is also transferring from the university. Telfort, similar to Smith, was also involved in the credit card scandal last season. Telfort is facing 30 criminal charges in the scandal, while Smith also faces 30 of his own.

In the final shakeup of the program, Marcell Harris would take to Twitter to announce that he is declaring for the NFL Draft.

The redshirt senior would miss the 2017 season due to a torn Achilles tendon in the right ankle. Harris would total 93 tackles in the 2016 season, with two breakout performances against LSU and Florida State. In those two games, Harris would get 11 tackles for his season highs. He also joins junior wide receiver Antonio Callaway as Gators to declare for the NFL Draft.